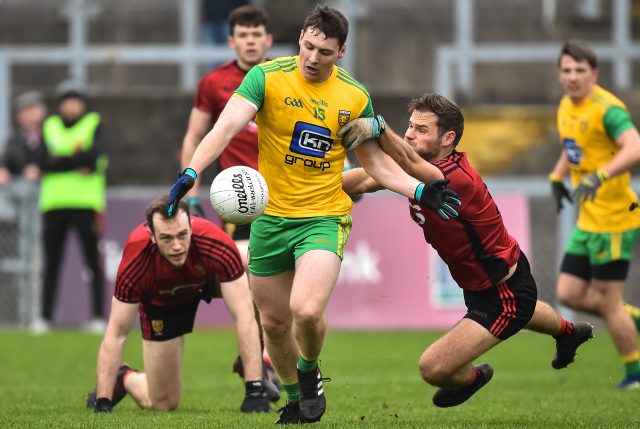 The Bank of Ireland Dr McKenna Cup continued on Sunday with the six Round 2 games down for decision.

In Section A, Donegal chalked up a convincing 1-17 to 0-10 win over Down at Páirc Esler. Martin O’Reilly, Jamie Brennan, and Martin McElhinney were all prominent as Declan Bonner’s men led 0-9 to 0-3 at half-time. Caolan McGonagle supplied the insurance goal in the 62nd minute as Donegal claimed the spoils.

Cavan, also maintained their perfect start to this year’s competition with a comprehensive 0-17 to 0-3 victory over Queen’s University at Ballyconnell.

The outcome of the this Group will be decided on Wednesday night when Cavan travel to Ballybofey to meet Donegal.

Perhaps the surprise of the day came in Clones as the students of St Mary’s produced a gutsy performance to hang with and then reel in Monaghan claiming a share of the spoils, 1-14 to 0-17. Shane McGuigan gave a Man of the Match performance for the Falls Road college, while Barry McGinn grabbed the Monaghan goal.

There were no such problems for Armagh as they produced a power-packed first half performance to cruise past Antrim 2-21 to 1-10 at Glenavy. Jamie Clarke and Ryan McShane scored first half goals for the visitors as they gave a second assured performance of the season.

Armagh are now in pole position in the group and welcome Monaghan to the Athletic Grounds on Wednesday night with the winners guaranteed a semi-final place.

In Omagh, Tyrone needed second half goals from Declan McClure and Peter Harte to see off Ulster University. Daire Gallagher had hit the net for the students against his home county, while Lee Brennan top scored. Tyrone however are all but assured of a position in the semi-final.

In Brewster Park, Ben McCarron replaced the injured Ryan Bell and helped himself to 3-1 in a Man of the Match performance visitors Derry. Darragh McGurn and Ryan Lyons hit back for Fermanagh but they fell to a 3-9 to 2-8 defeat.