Queen’s GAA at the weekend honoured their 2018-19 Danske Bank Future Stars, the 15 players to come through a series of trials in December organised by the Ulster Schools’ Council for students in their final year of GSCE studies.
This is the fourth year of the Future Stars programme, with previous winners including Callum Brown, now of the AFL’s Great Western Sydney Giants, Tyrone senior panellist Darragh Canavan and Derry minor star Iarlaith Donaghy.
Three players from the St Colman’s Newry team that collected the Danske Bank Rannafast Cup in November are included; Peter McGrane, Adam Crimmins and Padraig Clancy.
McGrane is a nephew of former Armagh All-star and Queen’s star Paul, while the performances of Crimmins in the Rannafast Cup earned him the Ulster Schools’ Player of the Month for November.
The other Newry school, Abbey CBS, has two players in the line-out, including the hugely talented John McGovern who converted the all-important penalty that knocked St Mary’s Magherafelt out of the MacRory Cup at the start of the December. McGovern also starred for Ballyholland during the Ulster Minor Tournament run by St Paul’s Belfast.
Two more of the team, Callum Laird (St Malachy’s Castlewellan) and Oran Cunningham (St Patrick’s Downpatrick) will meet each other in the upcoming MacLarnon Cup. 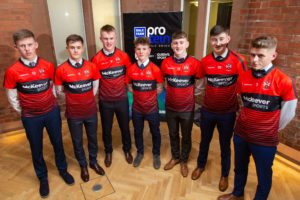 There are five players from Tyrone schools, two from Derry city and Daithi óg Mac Roibeaird who completes a month of celebration for Gaoth Dobhair by making the selection as goalkeeper.
Down and Queen’s legend James McCartan, who headed the selection panel, found it very difficult to whittle the more than 120 trialists down to just 15 players.
“The quality of player on show at this level was a testament to the fantastic work being undertaken throughout Ulster Schools’ competitions. There were outstanding candidates all over the field, especially in the final trial and there was plenty of evidence on show that Ulster Schools football is in a very strong place in 2018.”
Queen’s GAA Development Officer Aidan O’Rourke said, “Queen’s University is focused on developing and rewarding excellence as demonstrated by the Danske Bank Future Stars programme. Our athletes at Queen’s are supported through The Sean O’Neill GAA Academy and their development is overseen by a dedicated staff, which includes world-leading Strength and Conditioning Coach Mike McGurn and pioneering sports psychologist Hugh Campbell. The Academy is a challenging and mentored environment within which young players can excel towards county senior football.
We are ever more conscious of the pressures that sport adds to the academic journey at University and we are very much focussed on helping students balance the twin goals of sporting excellence and alongside a world class education.”

The team selected for the 2018-19 Danske Bank Queen’s University Future Stars is as follows: