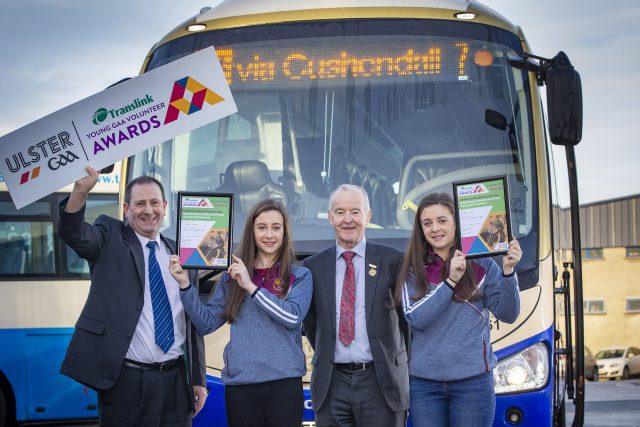 Translink and Ulster GAA presented the Young Volunteer of the Month award to twin sisters from Cushendall.

Emer and Áine Quinn, 17-year-old siblings from Ruairí Óg GAC were given the prize in recognition of their outstanding contribution to both club and community.

Commending the sisters on their accolade, John Morgan, Translink said:

“The Translink Ulster GAA Young Volunteer of the Month award is designed to recognise and celebrate those young people whose efforts best represent the volunteering ethos of the GAA.

“Having reviewed the entries, we were particularly struck by a joint entry nominating these two sisters. It was clear from this nomination that Eimir and Áine are leaders both on and off the field and we are delighted to be able to reward their work in this way. The girls now join a prestigious group of young GAA volunteers who have been honoured with this special award.”

Speaking about the contribution the twins are making to their club, Anne Maire McNaughton from the Ruairí Óg, Cushendall said:

“For the past two years I have worked closely with two outstanding volunteers; Áine and Eimir Quinn.  Both girls have helped organise our new culture group and are part of the reason we have been so successful.  They are dedicated volunteers who take part in Scór, the musical group and dancing. They organise practise nights, transport and musicians and encourage younger members to come along and help at events.

“Both girls play camogie and are a great example to the younger teams, dedicated, enthusiastic and committed. They show great leadership and are a precious asset to our club.”

“It is uplifting to see two young women give so much time and commitment to their club.  The girls who have achieved highly in their own education, still manage to find time to help develop their GAA club.  Their love for the Irish language and culture has meant they are a real asset to the development of culture and language in their club Ruairí Óg.  It is a pleasure to award these two outstanding young volunteers, they are role models to young people everywhere.”

The overall winners prize will be presented at the Bank of Ireland Dr McKenna Cup final.