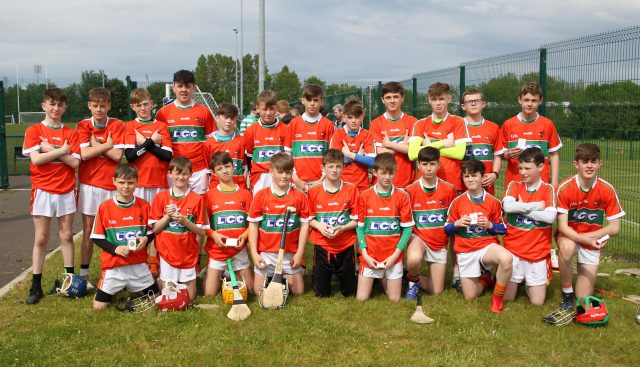 The Lavey team who claimed the Cup at Féile Uladh

Ulster GAA hosted Féile Uladh at Woodlands Playing Fields in Belfast on Saturday for Under 14 teams from across Ulster to showcase their hurling skills.

There were 13 teams in attendance from six counties with an exceptional level of commitment and skill shown.

The Cup Final was contested by Erin’s Own, Lavey from Derry and the Cavan team Cootehill. Eventually the Derry boys would emerging 4-5 to 1-3 victors.

The Shield Final saw Antrim’s Brid Óg get the better of Donegal team Buncrana on a 3-5 to 1-1 scoreline.

Bredagh from county Down celebrated Plate Final victory as they saw off Down rivals, Carryduff 4-5 to 2-4, while in the Bowl Final, Donegal teams Burt and Letterkenny Gaels, had a terrific game, the Letterkenny boys claiming a 3-3 to 1-3 winners.

Joe Edwards, the Vice-Chairperson of Ulster Hurling Committee was on hand to make the presentations to teams.