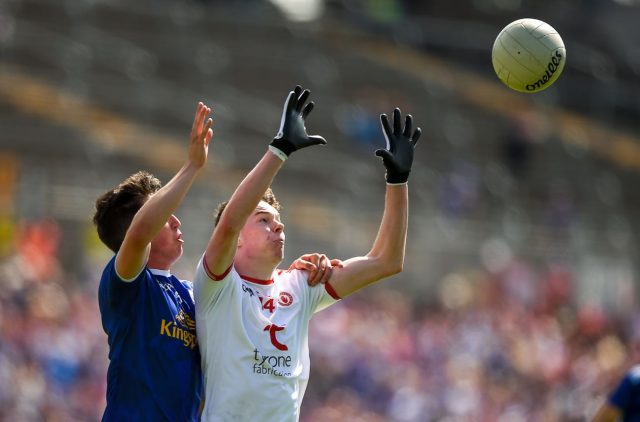 Tyrone advanced to the EirGrid Ulster Under 20 final after holding off a resolute Cavan team on Saturday afternoon at St Tiernach’s Park.

Tyrone scored the first point of the match and never relinquished that lead during the rest of this semi-final encounter as their greater efficiency up front saw them progress to the final next Sunday against holders Derry.

It was a beautiful afternoon for football in Clones as the Under 20s provided the curtain raiser to their senior counterparts Round 4 Qualifier.

Scores were hard to come by in the first half with both sides forcing numerous turnovers but also tallying up a large number of wides. Darragh Canavan opened the scoring with a point from play in the third minute and it was almost ten minutes before Liam Gray popped up with the game’s second score of the day.

The @TyroneGAALive Under 20 manager Paul Devlin knows that his side got over a massive hurdle against a capable @CavanCoBoardGaa team on Saturday in the @EirGrid Ulster U20 semi-final pic.twitter.com/qUSYfMzAa8

John Brady’s side had a strong start to the second half hitting three of the four points registered on the scoreboard by the 41st minute. Patrick Lynch served up two of these, one from play, and Cormac O’Reilly the other. Ethan Jordan settled Tyrone with a great point from far out in the 46th minute and another Canavan free made it 0-9 to 0-5 two minutes later.

A big point from Cian Madden gave the Breffni men brief hope but a Michael Conroy double, first from play and then a free in the 55th minute, killed of any realistic comeback hopes.

Patrick Lynch, with two frees and Oisin Brady from play kept Cavan pressing on until the end but two Peter Óg McCartan points from play in injury time helped Tyrone through to the provincial decider in the Athletic Grounds next weekend, 0-13 to 0-9.