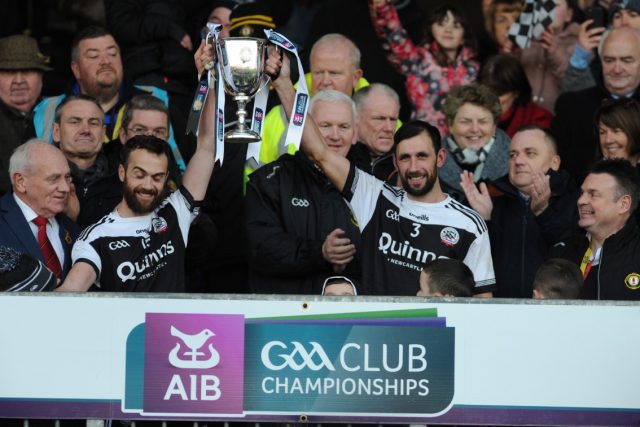 Kilcoo claimed their first AIB Ulster Football Senior Club Championship title this afternoon as they got the better of Naomh Conaill at Healy Park.

Goals in either half from Aidan Branagan and Darryl Branagan gave the Down men the foothold they needed to claim the Seamus MacFerran Cup.

There was little to split the sides in the opening quarter with the scores tied at 0-3 to 0-3 before Kilcoo kicked on to claim a 0-8 to 0-3 lead just before the interval.

There was drama in the run up to the break with Aidan Branagan netting for Kilcoo but Naomh Conaill responded straight away through Charles McGuinness and Jeaic McKelvey to leave the score at the break 1-8 to 2-4.

Scores were at a premium in the second half but a Daryl Branagan goal midway through the half gave the Down men what looked to be an unassailable lead.

Naomh Conaill to their credit closed to the gap to a solitary point, with Anthony and Ciaran Thompson to the fore, before Branagan again assumed responsibility in injury time to make the score 2-11 to 2-9 and give his side victory.