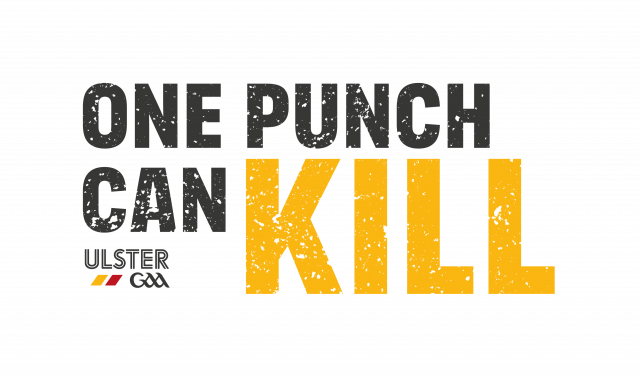 For some time now Ulster GAA have been raising awareness of the impact one punch scenarios can have on both victims and perpetrators.

One Punch scenarios are those when one or two punches are thrown – different from an attack or a fight. The reason why one punch is getting attention is the fact that often the people who are involved in such scenarios are not looking for trouble, and yet the consequences can be life-changing.

Ulster GAA has linked with An Garda Siochána and the PSNI to force some attention onto this issue. Typically, the one punch scenarios which are dealt with most by the authorities are on nights out, and usually when alcohol and/or other drugs have been consumed. Inhibitions are lessened and people can often behave irrationally or aggressively. Add-in the fact that people may be less steady on their feet, and obviously one punch can have devastating consequences.

The frequency of serious injury and death resulting from one punch has increased in recent years with devastating consequences for all concerned. An Garda Siochána’s campaign “Use Your Brain Not Your Fists” and the PSNI campaign “One Punch Can Kill” aim to work with schools, community groups and sports clubs to get the message across. Young males (16-24 years) are the most at-risk group, hence why GAA clubs can play a vital role in educating a wide audience.

Although nights out are the most common scenario for one punch it can become an issue on the pitch. Both An Garda Siochána and the PSNI are keen to point-out that the setting for one punch is irrelevant when it comes to injuries sustained and prosecution. A broken jaw caused by one punch on a GAA pitch may be treated as grievous bodily harm (GBH) just as it would if carried-out on the street. Similarly causing death by one punch on the pitch may be treated as manslaughter or murder just as it would if carried-out on the street. Mass brawls on the pitch, or anywhere else, will not offer a hiding place for perpetrators during an investigation. Individual’s will be identified and pursued by the courts just as they would if only one perpetrator is involved. Mass brawls do no diminish the seriousness of an individual’s actions.

Medically a punch to the head or neck can be catastrophic resulting in short-term or long-term injury, including brain damage. Brain damage can present as loss of some or all of the senses; loss of cognition; loss of balance and motor skills; memory loss; and altered personality. Add-in the emotional distress caused to all involved, possible disfigurement and possible loss of earnings and general disruption to normal life, and its clear that one moment of madness can have long-lasting and far-reaching implications. And it must also be acknowledged that people do die from one punch scenarios, and is something which has become more prevalent.

Legally, once in the hands of the authorities one punch scenarios can be categorised as anything from the lesser charge of assault to the most serious charge of murder. Any charge will result in a summons to court, a criminal record and possibly a custodial sentence. A criminal record is likely to have far-reaching negative impacts on employment, travel restrictions and so on.

Ulster GAA are keen that clubs take-up the offer of rolling-out a 1-hour One Punch workshop to their members – particularly young males, senior teams and coaches and managers. The workshop can be delivered in your club and can be organised by contacting maura.mcmenamin.ulster@gaa.ie for more information.