Abbey CBS produced a strong second half performance to deny Our Lady and St Patricks College Knock the dream debut in the final game of Round 1 in the 2021/22 Danske Bank MacRory Cup on Friday night.
The game was nip and tuck in the early stages, with points from Luke McKeever and Zach Murdock for Abbey cancelled out by Finn and Emmet Rodgers for Knock. But just as Abbey threatened to pull ahead before the break they were reduced to 14 players and right on the stroke of half-time, with Knock centre half forward Aodhan McNicholl then levelling the game at 1-02 to 0-05.
In some ways, the half time whistle came at the wrong time for Knock, as the break allowed Abbey to regroup and adjust themselves to going a man down.
When play resumed, it was the Newry side that took a firm grip on proceedings, kicking 1-5 without reply, including a well taken goal from sub Johnny McGivern.
Luke McKeever added points to bring his total to 5 for the night, and although Oran Donaldson bagged a late goal for Knock, it wasn’t to be the debut MacRory Cup game that they dreamed of under the lights at Páirc Esler.
Final Score
Abbey CBS 1-12
Our Lady’s & St Patrick’s Knock 2-03
Official Down GAA | Armagh GAA | Official Antrim GAA 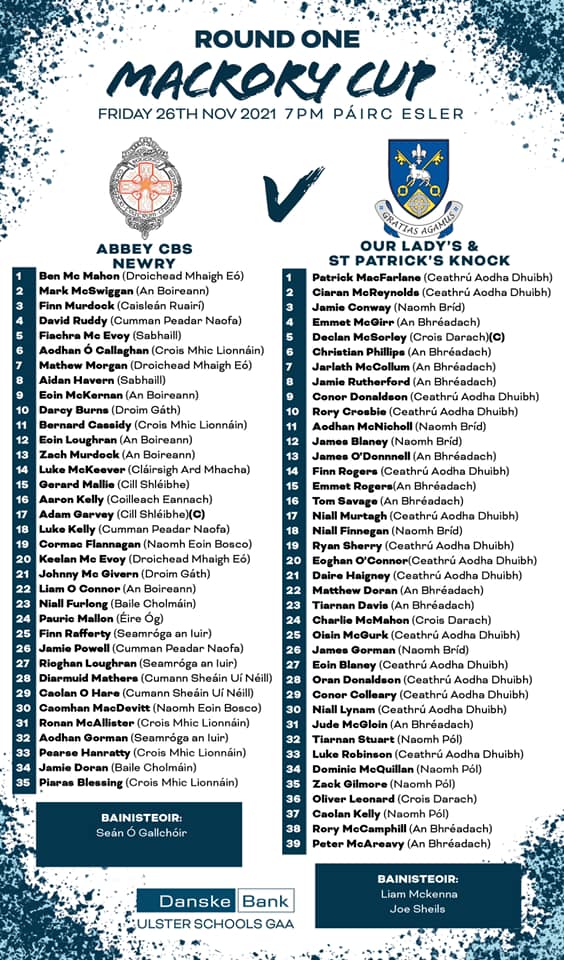