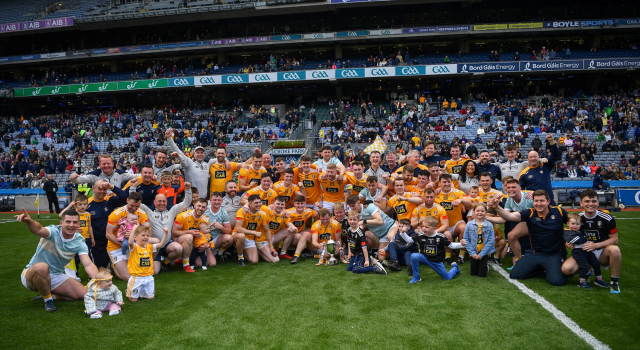 Antrim will compete in the Liam MacCarthy Cup in 2023 after edging a remarkable Joe McDonagh Cup final on Saturday in Croke Park to regain their Leinster SHC status.

It was the Saffrons’ second McDonagh Cup final win over Kerry in three seasons, repeating their 2020 success, and they will return to action next weekend against Cork in an All-Ireland SHC preliminary quarter-final tie.

Kerry will be back in action too, against Wexford, though it will take some time for the Kingdom to process the outcome of this nine-goal thriller which went right to the wire.

Antrim led by 12 points after 25 minutes but when Padraig Boyle, who struck 2-11 in total for Kerry, rifled his second goal in the 77th minute it reduced the deficit to just a single point.

Time ultimately ran out on resurgent Kerry who slipped to their third consecutive final defeat.

With Antrim striking 20 goals in just five group games – six against Down and seven against Meath – the challenge for Stephen Molumphy’s Kerry was clear; stop the Saffrons from raising green flags.

Unfortunately for the Kingdom they failed to do that and by half-time the favourites had three goals registered, not to mention the 14 points they also plundered.

Kerry played with a two-man full-forward line of Colum Harty and Shane Conway, allowing them to drop Colin Walsh, wearing number 10, into defence and ultimately freeing Mikey Boyle to perform as a sweeper.

It was a clear ploy to prevent Antrim cutting their defence asunder but the Division 1 outfit found it a simple enough exercise to work their way around the extra bodies.

Some of their attacking moves were sumptuous as they dovetailed superbly and swooped for their first goal after just five minutes.

Clarke danced infield from the right beyond a couple of Kerry defenders after being played in by Joe Maskey and slammed the ball to the net.

Six minutes later, Clarke was the provider for McNaughton who still had some work to do to shake off Paudie O’Connor but showed real strength to break clear and make it goal number two.

Already Kerry looked in real trouble with Antrim 2-3 to 0-2 up.

Four Cunning points in a row, and another from Keelan Molloy, left 11 points between them – Antrim would stretch the gap to 12 after 25 minutes – and it looked at that early stage like the game might already be beyond Kerry.

Credit to the Munster men for refusing to throw in the towel. Between the 24th and 33rd minutes they outscored Antrim by 1-3 to 0-1, Padraig Boyle hitting the net from a penalty that was won by Fionan Mackessy, to bring the gap back to a more manageable seven points.

The burst of scoring appeared to awaken Antrim from their mini-slumber because they responded by closing out the half strongly, adding a third goal through Elliott in stoppage time.

This time Molloy was the architect, breaking clear and drawing a save from Kerry goalkeeper Louis Dee, Elliott first onto the scene to double on the loose ball to the net.

Cunning added a point and suddenly Antrim were back sitting pretty again, leading 3-14 to 1-10 at half-time.

The second-half was a thrill-a-minute ride, Antrim adding two more goals through Cunning in the 41st minute and Clarke in the 60th and Kerry responding with 2-2 from substitute Jordan Conway and that late, late Boyle major.