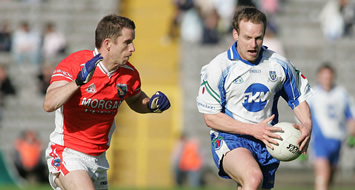 Despite the winning margin, Dublin never looked comfortable until Conal Keaney and Ciaran Whelan were introduced midway through the second period.

Mark Vaughan was in inspired form throughout, grabbing four points in total to give his side a flattering win.

But Dublin manager Paul Caffrey will not be satisfied with his side’s showing throughout long periods of the first half, as Cavan forward Seanie Johnstone pilfered six points in total and led the Sky Blues’ defence on a merry dance.

Indeed, it took a Bernard Brogan goal on 62 minutes for the Leinster champions to finally kill off a spirited Cavan side.

However, had Dermot McCabe not been denied by a brilliant save by Stepehen Cluxton a minute later, the scoreline could have had a very different complexion in the end.

Johnstone opened the scoring for Cavan on six minutes, with Michael Lyng adding a second soon after.

Johnstone grabbed three more points in the next ten minutes to give Cavan a surprise three-point lead on 20 minutes.

A Dublin fightback was inevitable and the brilliant Mark Vaughan got them off the mark, with Brendan McMenamon adding a second two minutes later.

Vaughan added two more just before the break to leave the scores 0-5 to 0-4 in favour of the underdogs at half-time.

Caffrey must have read the riot act to his players at the break because they came out for the second period with renewed purpose.

Dublin had too many aces on the bench to allow the game run away from them and when Keaney was introduced he had an immediate impact.

His point on 51 minutes was followed by another Vaughan effort, while Keaney grabbed a second with nine minutes left.

Johnstone had pegged Dublin back with another point in the interim but Brogan’s goal a minute later all but ended the game as a contest.

McCabe missed a golden opportunity to drag Cavan back into the game from the restart but Dublin held on as the game petered out amid a rash of late yellow cards.

Niall McNamee was the Offaly saviour at Casement Park as the Faithful County snatched a late draw against Antrim in a top of the table NFL Division clash on Saturday night.

Offaly went in three points up at the break thanks to a John Reynolds goal on 18 minutes.

But a combination of the stiff breeze and a Ciaran McManus sending off saw the Saffrons mount a second half comeback.

Paddy Cunningham was at the fore for Antrim, but McNamee snatched a point for Offaly with a late double.

Kildare prospect Mickey Conway grabbed a free at the death to seal a win against Donegal at St Conleth’s Park on Sunday.

The Northerners led by a point entering injury time, but the win was snatched away from them when Conway landed a point from play and a free in the dying seconds.

Kildare started badly with a series of poor frees close to their own goal handing Donegal a 0-3 to 0-0 lead seven minutes in.
Things changed when wing forward Johnny Doyle handed them a one-point lead, 0-5 to 0-3, with 27 minutes gone, with some sharp shooting.

Dermot Earley, a surprise starter in Kieran McGeeney’s side after Ronan Sweeney was ruled out with a shoulder injury, was back in midfield after playing Kildare’s previous games at full forward.

Pádraig Mullarkey wasted a serious chance of a goal two minutes into the second half.

But Donegal emulated them a minute later when Bradley skewed a shot wide with the goal gaping.

Doyle could have given his side a cushion with a penalty on 65 minutes, but he chose the white flag with Kildare losing by a point. Up stepped Conway.

Galway moved to the top of the Allianz NFL Division One table after a narrow win over Tyrone at Pearse Stadium.

Michael Meehan led the way for the home side, with a tally of 1-05 helping them to their third win from three.

Meehan ran the show right from the off, and a goal and a free after eight minutes had Galway leading until Sean Cavanagh found the net for Tyrone 17 minutes in.

The game was level at the break on 1-04 apiece, before Owen Mulligan set Raymond Mulgrew free to score Tyrone’s second goal, levelling the match once again after Meehan and Niall Coleman put Galway ahead.

Mulligan and Tommy McGuigan pushed Tyrone in front near the end, but Meehan, Gary Sice, and Meehan hit back to hand Galway another victory.

On this evidence, good things still await Derry for the coming season, but only when
Paddy Bradley purrs. The corner forward opened the scoring after just 15 seconds, cutting through a veritable ocean of time and space to point.

Two minutes in, Enda Muldoon landed another easy point for Derry. Sean O’Sullivan pulled a point back for them on five minutes, but the All-Ireland champions were finding it hard to breathe up front.

Bradley was claiming a lot of ball for Derry up front, and added another point before the hosts began to settle. Donaghy scored a fine point on 13 minutes, cutting inside two Derry backs to fire over from well out the left.

A mini-melee broke out which ended with Francis McEldowney seeing a straight red for an offence which seemed less than clear. Derry entered the break 0-6 to 0-5 ahead, but wondering what effect the player’s loss would have.

Sean O’Sullivan and Enda Muldoon exchanged points at the beginning of the second half. Liam Hinphey and nearly added a goal, but Cremin stood up brilliantly to his powerful strike, deflecting it over the bar.

Sheehan scored another two to level the match for the fifth time on 50 minutes, breaking clear from David Moran’s assist.
Lynch missed a chance to hand Derry the lead, Bradley skewed an effort wide, and the clock ticked into the 70th minute, when Sheehan landed another free.

Paul Finlay stepped up in the last minute to land an injury-time free which gave Monaghan a one-point win over Armagh in Clones.

His eighth and most important point, the pressure kick saw the home side hold out against 14-man Armagh, who lost captain Paul McGrane for most of the second half after he picked up two yellows.

Armagh made all the running in the opening, and two points from Tony Kernan, added to efforts from Paul Courtney and McGrane saw them 0-4 to 0-0 up early on.

Their hold on the game deepened further after McGrane was sent off in the 42nd minute, but a late Aidan O’Rourke goal kept Armagh fighting the odds, before Finlay had his final say.

It was Fermanagh’s league debut following the postponement of their round 1 and 2 games and although they started brightly Longford fought their way back into the game. However Fermanagh eventually secured a 2-10 to 1-10 win over their hosts.

Wexford sit on top of NFL Division 3 following a 2-08 to 0-09 home win over Down while Fermanagh, Louth and Sligo all recorded their first victories of the season.

A Wexford win looked in doubt early on however two goals turned the contest in their favour and they ran out five point winners at Wexford Park.