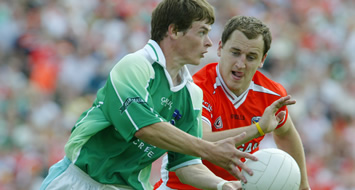 At one point, Fermanagh were eight points in arrears, but goals from Mark Murphy and Matthew Keenan turned the game on its head.

Leitrim finished with 13 men after Michael Duignan and Shane Foley were sent off, while Fermanagh also finished a man down when Martin McGrath was shown a red card.

In the end, it was Pat Cadden’s goal that sealed the victory for Fermanagh but Leitrim’s indiscipline played a major part in their change of fortunes.

Leitrim led by 2-6 to 0-4 just after the break thanks to goals from Declan Maxwell and Emlyn Mulligan after Fermanagh struggled to cope with the strong breeze in the opening half.

The Erne County did not open their account until 17 minutes in when Matthew Keenan pointed. Leitrim, however, already had three points on the board at that point.

Maxwell scored the opening goal of the game in first-half injury time, just as Fermanagh had established a foothold in the game.

And when Mulligan netted just after the break, the result looked like a formality.

Then Foley saw red and Matthew Keenan and Mark Little reduced the deficit, with Keenan grabbing a second goal for the visitors to set up a grandstand finish.

Matthew Keenan and Mulligan exchanged further scores before Cadden sealed a win for the Erne County with a goal at the death.