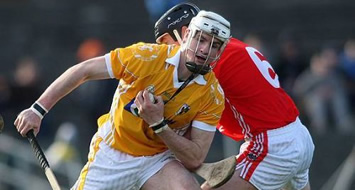 Despite losing Owen Mulligan early in the second half to a hamstring injury, Tyrone took their first win of the 2008 NFL after a tenacious affair at Healy Park, Omagh on Saturday night.

In a free-flowing encounter Liam Kearns may have lost the talented Ross Munnelly through injury after 12 minutes, and made a less than convincing start to this game but they pushed the hosts to the limit.

The floodlights beamed down strongly on Healy Park, and there was also some sparkling football on offer in a contest that failed to boil over and saw some brilliant points from all angles taken by both sides.

Laois began this game at blistering pace but were wasteful in front of the posts kicking three wides inside five minutes, with Tyrone far more clinical in attack as Owen Mulligan, Colm McCullagh and UUJ Sigerson Cup panellist Ray Mulgrew sent over points, with the hosts taking an early advantage.

Mickey Harte’s charges were certainly rampant in the opening stages and had five points on the board inside 14 minutes with half-back Davy Harte completing the hosts purple patch with a spectacular score after a good passing movement involving Colm McCullagh and Mulligan.

Laois were yet to score but the visitors now upped their game and a fisted Colm Parkinson score following good work by Billy Sheehan finally got them off the mark in the 20th minute, however they still had plenty of work to do.

Laois were forced to dig deep and the free-taking abilities of MJ Tierney ensured they were two points adrift with 11 minutes remaining in the opening half.

Tyrone remained solid with some excellent defending by Ryan McMenamin but a Brian McCormack point cut the gap to the minimum by the 26th minute.

However Tyrone were strongest before the interval with Colin Holmes, Sean Cavanagh and Mulligan on target as against a lone Tierney point to give the Red Hands a 0-8 to 0-5 interval advantage.

Tyrone were left mesmerised after the interval when Laois made a blistering start to the second half with substitute Colm Kelly, and MJ Tierney (2) both on target to level the contest for the first time in the 39th minute.

Despite the departure of Mulligan, Tyrone rallied strongly and points from Tommy McGuigan and Harte saw them edge back in front.

Laois kept up the pace well with Billy Sheehan and Brian McCormack taking well placed scores, however Tyrone continued to edge the lead.

But they weren’t quite able to shake off a resilient Laois side who cut the gap to a point with nine minutes remaining following a second McCormack score.

An Enda McGinley point put Tyrone back into a two point advantage with seven minutes remaining, a score which signalled the return to action of Brian McGuigan who got a standing ovation on his introduction.

Laois battled back with defender Peter O’Leary popping up for a point, before the only real goal chance of the contest fell to Sean Cavanagh who blasted wide from close range.

A seventh point for Tierney levelled the tie for only the second time, and although Tyrone broke in front once more, with five minutes of injury time there was still plenty of room for Laois to steal a win.

However this failed to materialise as a 75th minute Davy Harte point ensured a two-point home win.

Donegal just about survived to record their third win of the league, holding on after a late comeback by Galway pushed them about as much as they could handle.

Leading by five points at the beginning of the second half, Donegal’s situation improved even more when Galway corner back Damien Burke was sent off.

Donegal began to settle however, and points from Colm McFadden and Brian Roper helped them to a 0-9 to 0-6 lead at half-time.

Roper then landed a goal to put them 1-11 to 0-9 ahead, for which Michael Meehan responded with a goal for Galway. It wasn’t enough to overhaul the league champions however.

Donegal now sit level with Derry and Galway at the top of Division One, each with three wins and one defeat.

Derry moved to the top of the Allianz NFL Division One, with a big win over Kildare at Celtic Park.

A goal from Mark Lynch 90 seconds in set the tone for the rest of the game, as Derry cruised to as easy a win as they can expect in the league this season.

Five points from Paddy Bradley drove them to a 1-10 to 0-4 lead at half-time, and a stunned Kildare side never recovered.

Despite scoring six points without reply, divided equally between the end of the first half and the beginning of the second, they failed to eat into the gap sufficiently to ever worry Derry.

The Ulster side now lead at the top on points difference.

Cavan lost a seven point lead as Cian Ward inspired Meath to a massive comeback in Pairc Tailteann, to claim their second win of the league campaign.

Ward landed seven points in the second half to add to his two in the first, as Meath overhauled the Ulster side, who now sit rooted to the bottom of Division Two with four straight defeats.

Seanie Johnston made most of the headway for Cavan in the first half, with five points helping them to a 0-11 to 0-4 lead at half-time.

Playing with a strong wind in the second half, Meath began to assert themselves in all areas of the pitch, with Ward doing the damage up front.

Down managed to hold off a late rally by Longford to win 0-19 to 0-16 in a free-scoring Newry encounter.

Leading 0-10 to 0-6 at half-time, Down found themselves level inside the last ten minutes, 0-15 points apiece.

The effort proved too much for Longford however, as Paul McComiskey, John Clarke and Benny Coulter pulled Down ahead at the last.

Antrim moved to the top of Division Four with an easy 0-13 to 0-7 win over Carlow at Casement Park.

Michael McCann hit five points from play for the home side, while CJ McGourty, Paddy Cunningham and Michael McCann also chipped in.

An impressive second-half display from Gerald McCarthy’s Rebels saw them see off the challenge of Antrim in the sides Allianz NHL Division One tie at Casement Park on a scoreline of 1-07 to 1-24.

The visitors only led by a solitary point at the break on a scoreline of 0-9 to 1-5, with Antrim’s Liam Watson netting for the hosts.

Cork introduced Ben O’Connor in the second half and the Newtownshandrum clubman added a much needed impetus to the Rebel’s attack as they forged ahead to put a impressive gloss of the final scoreline.

Liam Watson, who was particularly impressive in the opening half was sent off near the death after Cork newcomer, Brian Corry had smashed home a 66th minute goal.

Carlow claimed a hard-fought victory over Armagh in Dr Cullen Park, to put themselves top of NHL Division 2B.

A late goal from Ruairi Convery sealed an exciting 2 point win for Derry over Down in Banagher.

Tyrone suffered a heart-breaking defeat in Dundalk, as they conceeeded a late goal and point to go down by 2 points to the Wee County.

Donegal maintained their 100% record in Division 3 with a deserved 3 point win over Longford.

Kevin Campbell top scored for the home side with 7 points.

South Down sharp-shooter Ciaran Sloane helped himself to 2-10 as his side romped to victory over Fermanagh.

Michael Greaney scored two goals as Monaghan strolled to victory over Liatroim. The win puts the Farney men right back into contention for promotion out of Division 4.

Stephen McDonnell stole the show with a hat-trick of goals as Armagh destroyed a very poor Roscommon side at Crossmaglen.

Senan Kilbride had opened the scoring for Roscommon but they struggled to get to grips with a fluid Armagh side that included Tony, Stephen and Aaron Kernan.

Ger Heneghan bolstered the visitors’ total with some neat frees but a brace of second-half goals from McDonnell and one from substitute Brian Mallon saw Armagh cruise home in a disappointing encounter.

Fermanagh maintained their 100% record in Division 3 with a 1 point victory over Louth in Lisnaskea.