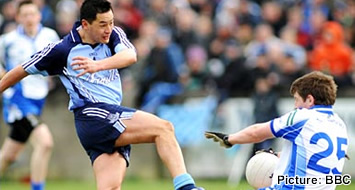 Fermanagh wrapped up a 0-14 to 1-7 triumph over Limerick in the Allianz National Football League Division 3.

The Ernesiders have won their last three games in Division 3 and made it four out of four in Lisnaskea with this win.

Mark Little converted three points, while Ciaran McElroy and Mark Murphy got two each to set them on their way to clinching an impressive victory.

Going in at the break with a 0-8 to 0-2 lead saw them grow in confidence and when they returned after the interval it was more of the same.

Eamon Maguire and Paul Ward kicked two points apiece to further extend their lead and make sure they caught up with Division 3 leaders Wexford.

A goal from Kieran O’Callaghan gave Limerick a glimmer of hope to erect a comeback, but it was too late for that to happen as Fermanagh closed the game out.

Down claimed a deserved 2-16 to 0-13 win over London in an entertaining Allianaz National Hurling League Division 2B clash at Pairc Esler.

Goals from James Coyle and Gareth Johnston set The Ardsmen on their way to going level on points with Derry in the league standings.

Coyle scored his goal just before the fifteen minute mark to give the home supporters something to cheer about on a windy day.

The home team went in at break leading 1-08 to 0-8, and they knew that there was still a lot of work left to do if they were to escape with a win.

Johnston scored on 67 minutes to kill the game off and secure the victory for the team wearing red and black.

Paul Finlay was the hero for Monaghan as his last-ditch free salvaged a point for the Farney County in a thrilling National Football League Division Two clash at Parnell Park.

In truth, however, it was Tommy Freeman who should take all the plaudits after he was fouled by Dublin’s Derek Murray to allow Finlay to take the glory at the death.

The Ulster footballer of the year contributed eight points to the Monaghan total – all of which came from frees.

Dublin led by four points with seven minutes remaining, but Bryan Cullen was sent off for a second yellow card and Monaghan managed to salvage a valuable point thanks to Freeman’s trusty boot.

Dublin finished with 13 men after Mark Vaughan was given his marching orders for his involvement in a fracas just after the break. The bleached blond Kilmacud Crokes clubman was given a straight red for a late challenge.

Monaghan led by 0-6 to 0-3 at the break after the Dublin attack had failed to click in the opening 35 minutes.

The first half was a largely forgettable affair, with only one point in total coming from play.

However, the game started in sensational fashion when Jason Sherlock bagged the opening score inside a minute, but it proved the only point from play in the first half.

Mark Vaughan doubled Dublin’s lead with a solid strike from a free in the fourth minute.

It was a fractious opening, however, and neither side managed to establish any sort of foothold in the game.

A pair of frees from Tommy Freeman and Paul Finlay – who shared the free-taking duties all afternoon – had the Farney County level on eight minutes.

Freeman had Monaghan in front for the first time a minute later, with Vaughan slotting over a quickfire equaliser for Dublin from yet another free.

Freeman tacked on two further scores from frees to put Monaghan two points up after 24 minutes.

The Farney County opened up a five-point gap just after the interval after score from Finlay and a wonderful effort from a narrow angle by substitute Stephen Gollogly.

Bizarrely, Vaughan’s sending off allied to the strong breeze proved to be the spark Dublin needed to reignite their faltering attack.

Corner back David Henry turned up in the opposition half to point brilliantly before Paul Flynn filched a goal for the Dubs with an accurate drive.

Brogan and Conal Keaney gave Dublin the lead for the first time in nearly 50 minutes on the hour mark.

However, Monaghan proved that they will have a significant part to play in the Summer’s championship when Freeman and Finlay grabbed two further points apiece to snatch a draw at the death.

Pastings like this 20 point defeat don’t do counties like Antrim any good but if one looks deeper behind the 70 minutes plus of hurling witnessed at Nowlan Park, it tells a different story.

Sambo McNaughton’s Antrim team never gave up in this game and were well in contention for 35 minutes, until Kilkenny turned on the style in the second half.

However the long journey by the Saffrons again didn’t seem to matter as they hit Kilkenny hard in the opening half, a 35 minute spell that saw the sides level on five occasions.

The first goal came after 19 and a half minutes when Paddy Richmond blasted to the back of the Cats net and the Dunloy corner forward was instrumental during the game, with his ‘major’ ensuring a 1-3 to 0-4 advantage.

The sides had already been level on three occasions inside the opening quarter with Richie Hogan and Martin Comerford (2) on target for the hosts, while Karl Stewart, Paul Shiels and Liam Watson each shared a point for the visitors.

However Brian Cody’s charges responded well in the closing stages of the half and with James Ryall now dominating at midfield, and Aidan Fogarty and Richie Hogan on target, the teams entered the dressing rooms level at 1-5 to 0-8.

But that was where the similarities between these teams ended as Kilkenny went on to stage a masterclass in the second half.

A Damien Fogarty point two minutes after the restart paved the way for a prolonged purple patch for the hosts and by the time Watson opened Antrim’s second half account after 20 minutes, Kilkenny had crashed home 2-8 with the goals coming from Aidan Fogarty (47th minute) and full-forward Martin Comerford (52nd minute).

There was no way back for the visitors as Brian Cody’s men could now afford to take their foot off the pedal with the influential JJ Delaney, ‘Cha’ Fitzpatrick, Comerford and Eddie Brennan all substituted in the final quarter.

The game was capped off with two fine points from substitutes and brothers Eoin and TJ Reid deep in injury time as unbeaten Kilkenny can now look forward to a league semi-final with confidence.

Meath grabbed their third win of the season with a comprehensive 1-16 to 1-7 win away to Armagh in Keady but failed to secure a semi-final slot after finishing third in the league standings.

Carlow cemented their spot on top of the table with an easy 1-14 to 1-7 win over Derry, to remain unbeaten from their five matches and now advance to the semi-final stages.

In Markievicz Park, Ger Dwyer scored both Donegal’s goals in a 2-14 to 0-13 win over Sligo. They top the division with four wins from four, while Sligo finish bottom with four defeats.

Monaghan cruised to a simple win away to fourth place Cavan, leaving Breffni Park with a 4-15 to 3-4 win.

South Down top the division with four wins from four, with Monaghan behind them on three wins and one defeat, ahead of Fermanagh on points difference.

South Down managed a narrow win in Division Four of the National Hurling League after beating bottom side Leitrim 3-11 to 2-12 in Carrick-on-Shannon.

South Down top the division with four wins from four, with Monaghan behind them on three wins and one defeat, ahead of Fermanagh on points difference.