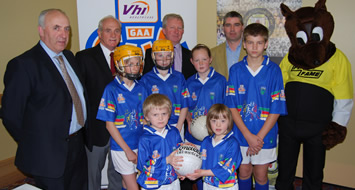 The VHI GAA Cúl Camps is a nationally co-ordinated programme of gaelic games which runs throughout the summer in every county in Ireland.

The camps encourage children to learn and develop sporting and life skills by participating in Gaelic Games in a fun, non-competitive environment.

In 2007, almost 16,000 Ulster children attended camps in each of the nine counties and this year the number of camps are on the increase and therefore, the number of children involved is also set to rise to an estimated 20,000 participants.

Attendance at camps is open to children aged 7 years to 13 years and all camps run from 10.00am to 2.30pm from Monday to Friday. Camps are structured to have 4 skill development days for primary and secondary levels, followed by a blitz tournament day.

All participants will receive a full set of playing gear (jersey, shorts and socks) and a knapsack that can double as a school bag later in the year.

A full list of all Cúl Camps in Ulster can be accessed through the GAA Cúl Camps website www.vhiculcamps.gaa.ie