Home / Ulster SHC off to a Thrilling Start 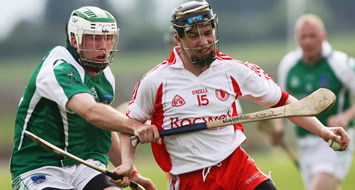 The new-look Ulster SHC got off to a thrilling start at Lisnaskea, where Tyrone squeezed through to the first round proper with a narrow one point win.

A late Sean Corrigan goal brought the Erne challenge back from the brink, but in the end, the Red Hands, thanks to some wonderful long range striking from midfielder Conor Gallagher.

Tyrone got off to the perfect start when John Kerr collected Paddy Devine’s pass to drill home a goal, and a Peadar McMahon point put them four clear.

Fermanagh got their first score in the 11th minute when Sean Corrigan crossed from the left for Andrew Breslin to finish from close range at the far post, and they missed an opportunity to go in front when Karl Kehoe had a penalty saved by goalkeeper Niall Gallagher.

A couple of Ryan Bogue frees had the sides level midway through the first half, but David Lavery restored the visitors’ two points cushion with two similar efforts.

Centre back Jason McManus powered over a long range free to bring the sides level again, and while McMahon edged the Red Hands back in front, they went in at the break a man short, after defender Leigh Moore had picked up a second booking.

Tyrone led by 1-5 to 1-4 at that stage, and stretched the advantage to three early in the second half when Devine and Gallagher hit the target.

From then onwards, it was a shooting contest between free-takers Gallagher and Bogue, and when David Lavery floated over a neat score from play a minute from the end, Tyrone led by four.

But as the game slipped into stoppage time, Sean Corrigan fired home a goal to set up a heart-stopping finish.

The Red Hands held on, however, and will play London at home next Sunday.

A goal five minutes into second half injury time by Michael Greaney helped propel Monaghan past the challenge of Cavan in a frenetic Ulster SHC clash at Kingspan Breffni Park.

Underdogs Cavan threatened to tear up the script with a spirited display which lent them the look of winners in a tense final quarter.

Cavan signalled their ambition to gain revenge for their NHL defeat at home five weeks ago by edging into a 0-4 to 0-3 lead by the end of the opening quarter.

However the hosts’ lead had a seriously precarious look about it as they were forced back on their heels by the unerring free-taking of Monaghan’s Stephen Lambe.

The game was a fractious affair all told with Cavan selector Michael Wall’s dismissal to the dug out in the 25th minute by referee Magee after arguing a decision a mite too much fairly reflective of the tension of the occasion.

There was never more than two points between the sides in the opening half and it was no surprise that the teams were tied at the break, 0-8 apiece.

Earlier a point blank save by Monaghan ‘keeper Michael McHugh prevented Mark McEntee from finding the net in the 36th minute – the only goal chance created in a claustrophobic opening moiety.

Stephen Lambe was Monaghan’s top-scorer on the day and his six frees in the first half appeared set to edge the visitors ahead at half-time only for Mick O’Gorman to rifle over a 39th equaliser for the hosts.

The second half was no less evenly balanced but neither side had the guile or the consistency to grab the game by the scruff of the neck.

Monaghan came out for the second half looking more like the side that last month annexed the NHL Division Four title and by the 41st minute they had careered into a two point lead, 0-11 to 0-9.

Cavan refused to yield though and a brillant sideline cut by Eugene Hill hoisted the outsiders into a 1-11 to 0-11 lead as an upset loomed large on the horizon. Monaghan came back fighting off the ropes though and the impressive Arthur Hughes (53mins) netted to leave the spoils in the melting pot once more.

Despite using his full deck, Monaghan manager Frank Brady just couldn’t steer his side onto easy street and, instead, they were left chasing the game as the game entered the final quarter.

Eugene Hill pointed smartly in the 62nd minute to ease Cavan into a 1-16 to 1-12 lead as Monaghan seemed to lack leadership and inspiration.

However the Brady bunch held firm and duly hit the jackpot at the death with Greaney breaking the blues’ hearts with a fine goal and an opportunist point eight minutes into injury time.