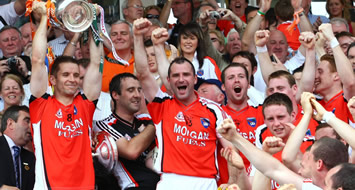 Armagh won their seventh Ulster SFC title in ten years with a replay win over Fermanagh at Clones. Paul McGrane and Aaron Kernan inspired the Orchard to provincial glory against an Erne side that paid the price for some wasteful shooting in the first half.

The sides were level at 0-2 each at the end of the opening quarter, after Ryan Keenan and Eamon Maguire had swapped points with Armagh’s Ronan Clarke and Aaron Kernan (free).

But the wasteful shooting that had blighted the Erne men in the drawn game re-emerged, and they hit nine wides in the first half.

Tony and Aaron Kernan got the Orchard men going again after Steven McDonnell and Ronan Clarke had been off target with clear-cut chances.

The sides were deadlocked on 0-4 each at the end of an error-ridden first half, but Armagh began to impose themselves on the contest in the early stages of the second half, easing ahead through Brian Mallon, before Clarke’s long range effort opened out a two points advantage for the first time in the game.

Barry Owens’ involvement lasted just eight minutes, the former Allstar full back stretchered off with a knee injury 13 minutes into the second half, but Tom Brewster’s free renewed Erne spirits.

However, it was Armagh who used their experience to exert a measure of control, and when Kieran Toner stopped the rampaging Marty McGrath in his tracks with a classic and crucial tackle, the counter-attack saw McDonnell kick his first point in the 58 th minute.

Soon Fermanagh found themselves trailing by four, and the game was slipping away.

They scored just twice in the final quarter, while the Orchard men closed the game out with scores friom McDonnell and Kernan, with his fourth free, before McDonnell grabbed the only goal of the game, netting from close range after Clarke had blasted against the crossbar.