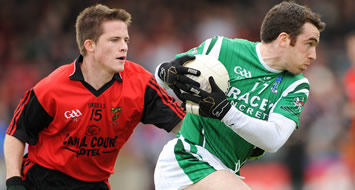 The Ulster Championship swung into action with a somewhat unexpected win for Fermanagh over a misfiring Down side at Brewster Park.

True, the Erne men were provincial finalists last season, true, they played in a higher league division than the Mourne men this season.

But this was a game that Down were expected to win, such was the perceived progress made by the respective counties this term.

Fermanagh had big-hearted players who weren’t afraid to show their passion and desire, and in this regard they played their opponents off the park.

Down were a side bereft of direction and strategy, and the manner in which they lost their way in the second half will be a huge worry to manager Ross Carr as he prepares for a trip down Qualifier lane.

Fermanagh made a bright start with points from wing back Tommy McElroy and midfielder James Sherry, both quality efforts from distance.

But the Mourne men were ahead by the 11th minute, when Aidan Carr converted two frees either side of a Benny Coulter point.

A game that was struggling to settle into any kind of patter swung back in Fermanagh’s favour, with Mark Little edging them back in front.

Fermanagh goalkeeper Chris Breen had to scramble to keep out an innocuous effort from Declan Rooney which dipped towards the far post, but that was as close as either side came to crafting a first half goal.

The home side countered immediately to go back in front through Ryan Carson, but in stoppage time, Stephen Kearney brought the sides level for the sixth time, turning around at 0-7 each.

A renewed flourish in the early stages of the second half saw Down open up a two points lead with the help of a Benny Coulters special, curled beautifully between the posts from way out left.

But solid defending from Shane Lyons and Shane McDermott helped Fermanagh survive a difficult period, and two frees from Ryan Carson had them level before Ciaran McElroy shot them back in front.

Carson tapped over another couple of frees, and there was little resistance from Down, evel less sign of a revival that would rescue their title bid.

And they limped out of the Ulster Championship with just 14 men on the field, Aidan Carr sent off on a straight red card in stoppage time.