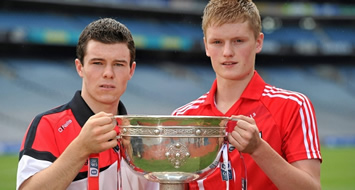 In the Minor decider, the Rebels are also in action, this time against Tyrone, one of the recent forces in the U18 grade.

Can Brian Cuthbert’s Cork side get the day off to the best possible start doe the Leesiders? Click on the link below to read a comprehensive match preview.

So can Cork’s luck hold? That is the big question surrounding Sunday’s ESB GAA Football All-Ireland Minor Championship final as the Rebels seek an 11th Tom Markham Cup, which would bring them level with roll of honour leaders Kerry. Standing in their way are the new kingpins of the Minor grade Tyrone who have won four titles in the last 12 years…no other county has managed more than one in the same period.

And it is the new kids on the block who had the more impressive route to today’s decider, although their semi-final win over Mayo was a much tougher proposition that many had anticipated. True, the Connacht champions had reached the two previous finals, but the Ulster side were odds-on favourites to win.

However, after 42 minutes Mayo led by seven points (0-14 to 1-4) and looked on course for a comfortable victory, but goals by Richard and Dara Donnelly spearheaded a dramatic turnaround as the Red Hand youths led by three with eight minutes remaining. Despite some hectic moments late on that was still the advantage when referee Rory Hickey blew the full-time whistle. Earlier Tyrone had looked imperious as Antrim, Down, reigning champions Armagh and Kerry had been overcome.

Cork’s form hadn’t been anything as impressive as narrow wins over Clare and Tipperary preceded a Munster final victory by the narrowest of margins against Kerry. Against the Orchard County in the All-Ireland quarter-final Cork looked dead and buried until an injury-time goal from Stephen O’Mahony sneaked a one-point verdict. And another Lazarus-like comeback was achieved in the semi-final against Galway when the Leesiders trailed by nine points entering the final quarter only for Brian Hurley’s late free to secure another minimum margin victory.

Incidentally, that was the only occasion that a team conceded five goals in a Minor semi-final and emerged victorious. Previously, Derry conceded four to Roscommon in 1965, but still reached the final on a 4-8 to 4-5 scoreline.

The counties have met four times at this grade with Cork leading 3-1 in the series while the Rebels also won their only final encounter in 1972 by 3-11 to 2-11. However, on the strength of the margin of their wins over Kerry and Armagh, Tyrone are favoured to take their eighth title.