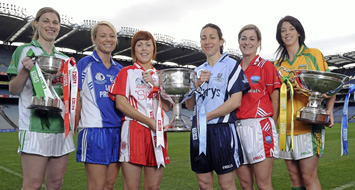 This Sunday is TG4 Ladies All Ireland finals day and Tyrone and Donegal will be flying the flag for Ulster and both have a realistic chance of winning.

Tyrone will meet Dublin in the senior final at 4pm and this promises to be a cracking encounter. Tyrone had a poor Ulster campaign losing to Monaghan and Armagh however when they reached the qualifiers they have been brilliant. First up was a meeting with Leitrim which the Red Hand girls won easily. Momentum was now beginning to build and they seen off the challenge of Sligo in round two to reach the quarter final and a tough assignment against reigning champions Cork. Tyrone stunned the ladies world as they not only beat Cork but did so comprehensively by seven points. The rebels were on their way to their sixth title and the result sent shockwaves across the country. This set up a semi final game against Kerry who like Tyrone had come through the qualifiers. The sides met in Ballymahon and could not be separated after 60 minutes however in the replay Tyrone edged the Kingdom by a single point to reach their first ever All Ireland senior final.

Throughout the qualifying campaign their goalkeeper Shannon Quinn has been rock solid. The defence has been in excellent form and the performances of Sinead Mc Laughlin, Maura Kelly and Neamh Woods have caught the eye. The midfield pairing of Shannon Quinn and Sarah Donnelly have developed a great understanding and each knows when to defend and when to drive forward. The attackers have been the aces in the Tyrone pack. Gemma Begley, Cathy Donnelly and Jolene Donnelly are first, second and third in the championship scoring stakes. Sarah Connolly and Aisling O’Kane are also in the top ten.

So what about Dublin? When they met in the National League, Tyrone won by a point in Dublin. However their manager Gerry Mc Gill who is a Donegal man is the first to admit that last year’s All Ireland final defeat took a long time to get over and affected their league campaign. The Dubs are undefeated in the championship. After putting together back to back Leinster titles they easily overcame Clare in the quarter final. Laois were next and once again Dublin made no mistake as they clinically won their semi final. The Dubs are a fine outfit. They have a wealth of experience and depth in their squad. But they also have had no luck in Croke Park finals – they have played in three and lost all three.

Sunday’s referee is Tipperary’s Keith Delahunte who will let the game flow. It should be exciting stuff and if Tyrone play to their potential there is no reason why the Brendan Martin cup can’t come north to Tyrone and the Red Hand girls make history by winning their first ever All Ireland senior title.

Donegal will play Waterford in the Intermediate final at 2pm in what should be another exciting encounter. The Tir Chonnail girls have only been beaten once this year in all competitions and are the current Division 2 National league holders.

New manager Michael Naughton has put together a squad who work very hard for each other. When they lose the ball everyone defends and they will run their socks off for the sixty minutes. The side has a lovely balance to it and all are comfortable footballers.

The side will be captained by midfielder Aiofe Mc Donnell whose father hails from Monaghan. Yvonne Mc Monagle has been doing most of their scoring and has hit 5-12 in the championship to date. In the semi final defeat of Longford Geraldine Mc Laughlin sacrificed an Irish soccer trial to play and was player of the match. The side has star quality all over the pitch and should be good enough to win.

Standing in their way is a Waterford side on the up. The Deise side played in Division 3 of the league and lost the final to Cavan however they overturned that result in the championship. If Donegal are to win they will need to keep a very close eye on the Ryan sisters, Sinead and Michelle. Sinead has notched 11-22 in the championship to date while older sister Michele has contributed 2-20.

The man in the middle in Des Mc Enerney who tends to clamp down on the physical stuff early on which should suit Donegal as they like to play football. This will be expected to be a close game but Donegal should have enough to shade it.