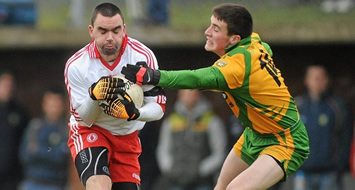 Tyrone, with manager Mickey Harte back on the sidelines, finally got their McKenna Cup campaign up and running with a 1-13 to 0-13 victory over Donegal on an emotional day at Edendork.

The game was preceded by a minute’s silence in memory of Harte’s daughter, Michaela, and the Tyrone players wore black armbands as a mark of respect.

Martin Donnelly scored the only goal of the game with a well-placed shot after 11 minutes, while Seán Cavanagh and Davy Harte added points to leave the home side 1-6 to 0-2 ahead and cruising after just 19 minutes.

However, quite remarkably, Tyrone failed to score again in the opening period and Donegal hit eight unanswered scores, with Leo McLoone starting the sequence in the 20th minute, to lead by 0-10 to 1-6 at the break.

Tyrone’s problems were compounded when Colm Cavanagh was shown a straight red card by referee Joe McQuillan just before the break.

Tyrone, playing with incredible spirit, made light of their numerical disadvantage and nudged ahead thanks to points from Seán Cavanagh and Aidan Cassidy.

Donegal were also reduced to 14 men in the 48th minute, when Neil McGee was sent to the line.

Scores from Martin Penrose, Brian McGuigan and another Cassidy effort eased the home side to a three-point win.

Derry earned a third straight win in Section B of the Barrett Sports Lighting Dr McKenna and secured a place in the last four of the competition following a comfortable 1-21 to 1-12 win over Monaghan at Celtic Park.

Conleth Gilligan top-scored for the Oak leaf County with a personal haul of 1-6, while Paddy Bradley was hot on his heels with 0-7.

After an evenly contested first half, John Brennan’s side led by 0-8 to 0-7, but Derry hit the after burners in the third quarter and kicked seven successive points to take complete control of the game.

An Eoin Duffy goal after 56 minutes briefly gave the Farney County hope, but a late penalty miss by Paul Finlay summed up their luck in a game in which they were comprehensively outplayed.

Antrim are through to the last four of the McKenna Cup after a 1-12 to 0-12 defeat of Armagh at the Athletic Grounds.

The Saffrons led by 1-5 to 0-5 at the break after Mark Sweeney scored a fortuitous goal – owing largely to a mistake from Orhcard County goalkeeper Philip McEvoy – on six minutes.

Conor Clarke and Rory Grugan edged Armagh to within a point, but Liam Bradley’s men reestablished their buffer thanks to scores from Paddy Cunningham and CJ McGourty, who finished with 0-4.

Hugh Brady’s late point rescued a draw for Fermanagh in their rescheuled McKenna Cup clash with UUJ on the 3G pitch at Kingspan Breffni Park on Sunday.

The students led by 1-8 to 0-7 at the break after Mattie Donnelly had found the back of the net in the first half.

Fermanagh, playing their first competitive game of the year, drew level midway through the half before UUJ managed to nudge ahead once again.

However, Brady’s late intervention ensured a share of the spoils for John O’Neill in his first game as Fermanagh manager.

In Section C, Down enjoyed an impressive 2-13 to 0-6 victory over St Mary’s at Pairc Esler, Newry on Sunday afternoon.

John Clarke scored a goal in the first half to give his side a 1-8 to 0-3 lead at half-time.

Clarke was again on target on the resumption of play to give James McCartan’s side – who had Mark Poland in fine form with a personal haul of 0-8 – a comfortable win.

In the only game to survive the weather on Saturday night, Cavan’s new joint managers, Val Andrews and Terry Hyland, picked up their first victory since taking over the Breffni County with a 0-12 to 0-4 defeat of Queen’s on the 3G pitch at Kingspan Breffni Park.

Cavan led by 0-6 to 0-4 at the break thanks to four points from Ronan Flanagan, while Queen’s were already a man down following the dismissal of Joe O’Brien on a straight red card.

Cavan were in control in the second half and Queen’s sole score was a goal from the boot of Niall McKenna.