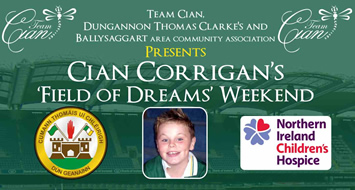 Were you in Croke Park on the third weekend of September 1995?

Did you witness the point that never was?

Can you remember the player who was sent off twice?

If you weren’t there, or you were there and can’t remember, Dungannon Clarkes in association with Jarlath & Rachael Corrigan invite you and your families to “Cian Corrigan’s Field Of Dreams Weekend”.  A series of events have been organised, beginning on September 30th, to celebrate the opening and dedication of Dungannon Clarkes new training pitch, which is being named in memory of Cian Corrigan.

Cian was a member of Dungannon Clarkes and in late 2008, at the young age of 11 years, he was diagnoised with a rare and teminal tumour.

By May 2009 Cian passed away but not before leaving an indelible impression on those who knew him and those who got to know him. He faced his condition with great fortitude and courage which belied his years.

Cian was a “Dub” by birth, and was brought up in Rush, North County Dublin. When the family relocated back to Dungannon a number of years ago his allegiance to the Dublin cause was severely tested. He always attended Tyrone matches with his father Jarlath but always kept one ear on how the Dubs were doing.

With all this in mind and as a thank you to the NORTHERN IRELAND CHILDREN’S HOSPICE, to whom all proceeds are going, the challenge was put to both panels and was accepted with great anticipation.

The weekend’s events start with the dedication of the new training facilities, on Friday September 30th at 6.30 pm.

Later that evening a question and answer session has been arranged in Mc Aleer’s Bar at 9.30 pm, with confirmed guests including Joe Brolly and Pat Mc Enaney. The evening is to be hosted by Dungannon’s very own Adrian Logan.

On Saturday October 1st, Dungannon Clarke’s U-14s will host Rush St Maur’s U-14s in a challenge match.  Both teams will have the great honour of being the first teams to play on the new training pitch.  This will be followed by a community fun day and barbeque. Later that evening, Dungannon Youth Club have offered up their new facilities for an 80s themed disco, with all proceeds going to Northern Ireland Children’s Hospice.

The main event, the Tyrone v Dublin rematch,which is being sponsored by O Neill’s International Sportswear, will take place on Sunday 2nd October at 3.30pm.  The management and backroom staff of both teams involved on that day will be in attendance, with both sets of players eagerly awaiting the up and coming challenge, subject to arthritis, heart conditions and weight issues!

To give it that added spice, the official from that day, Paddy Russell, will be officiating.  Match commentary for the day will be provided by the one and only Micheal O Muircheartaigh.

The match itself, follows a challenge match, a Team Cian Selection v a Celebrity Selection. The Team Cian Selection will contain many of Cian’s close friends and family against a team of celebrities and inter-county footballers (if available, subject to their club committments).

Please watch the press for further details or contact any of the people below. We hope to see you there at O’Neill Park, Dungannon, for what should be a terrific afternoon of nostalgia, fun and many talking points.