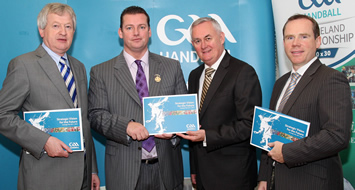 A large turnout was at Croke Park for the GAA Handball Ireland launch of their new ‘Strategic Vision for the Future, 2011-2016″ and it certainly has received widespread praise from all quarters.

Uachtarán C.L.G., Christy Cooney, was present to officially launch the plan and he highlighted how this is a “new beginning for this great sport which continues to impress in it’s massive strides forward”. He highlighted how “a terrific structure now being implemented has lead to a top class, comprehensive and ambitious plan being launched by the association and that the GAA are very proud of handball as one of our family of games”. The Uachtarán also pinpointed “the brilliant work at all levels of GAA Handball and the unique and hugely successful dimension of the game at International level and hoped that this would some day lead to securing Olympic Status”.

Uachtarán GAA Handball Ireland, Walter O’Connor, spoke of “the immense pride and passion within the association that was now witnessing growth and profile like never before.” He emphasised his continued commitment to ensuring “the best possible standards are met with a view to attaining the goals and ambitions within the plan and with those objectives realised, Handball will be in a very strong place in the future at all levels.”

The new  ‘Strategic Vision for the Future, 2011-2016’ was presented by C.E.O. GAA Handball Ireland, Chris Curran, and he advised that “a major task may now lie ahead but that the huge network of brilliant and committed volunteers throughout the association will relish the challenge and will no doubt succeed in the same manner which our top class players have done so on the court of play”.

Overall there is no doubt that GAA Handball Ireland are in an exciting era for the continued and accelerated growth of the game, with over a 30% rise in players and in excess of 20% of new clubs having joined the association in the past 2 years. Added to that is the creation of 118 new One-Wall facilities having been launched as part of the new One-Wall Initiative in Schools, it is clear that the sport is enjoying a very solid upward curve in growth and profile. The plan will now be distributed to GAA Handball Clubs and County and Provincial Committees over the next week as well as being distributed to GAA County Committees to view, as GAA Handball Ireland continues to strive for even greater levels of integration in the years ahead.