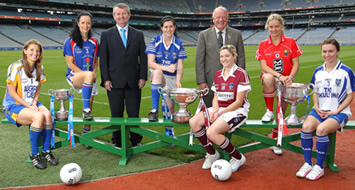 All roads lead to Croke Park on Sunday for the TG4 junior, intermediate and senior finals. There will be lots of Ulster interest on the day with Monaghan taking on Cork in the senior decider and Cavan meeting Westmeath in the intermediate final. In the junior final New York, whose vice captain is former Monaghan star Catriona Brady, play Wicklow.

Sunday will also be a big day for Gavin Corrigan (Down) and Yvonne Duffy (Cavan) as they will referee the intermediate and junior finals respectively.

The senior game at 4pm between Monaghan and Cork is the meeting of the best two sides in the country. Both have only lost one game each all year and the match has the potential to be a real cracker. It’s been 14 years since the Farney ladies last won the Brendan Martin and new manager Gregory Mc Gonigle has lead his side to within 60 minutes of the holy grail. Mc Gonigle along with his selectors Peter Clarke and John Downey have Monaghan ticking over nicely. They are fitter than ever before and they have been killing teams off in the last ten minutes as their opposition began to run out of steam. They cruised through Ulster and in the All Ireland series they have never looked in trouble. Captain Sharon Courtney has marshaled a defence which has seen Grainne Mc Nally and Aoife Mc Anespie turning match winning performances. In midfield Amanda Casey is back to her best while up front the Monaghan girls really are spoilt for choice. Cathriona Mc Connell, Therese Mc Nally and Ciara Mc Anepsie have been scoring for fun. With all that said Cork will be no pushover. They have won four of the last five titles and will be smarting from last year’s semi final loss to Tyrone. Eamon Ryan has shaken things up a bit however the backbone of his four in a row team is all still there. For those who can’t make it to Croker, the game will be shown live on TG4 but don’t go far as this one should go right to the wire.

Neighbours Cavan and Westmeath will contest the intermediate decider at 2pm in what should be a close and exciting decider. The sides have already met in the round robin stages which Westmeath won however Cavan have shown a steely determination this year that has been missing in recent times. On at least three occasions this season they have been dead and buried before grinding out wins. In their semi final game with Leitrim they found themselves nine points down. They managed a draw and then blew Leitrim away in extra time going on to win by ten points. This Breffni side can compete with the best. They proved this earlier in the year when they beat the All Ireland champions Dublin in league encounter. In Aisling Doonan, Pamela Crowe, Donna English, Grainne Smith and Bronagh Sheridan they have players who could walk onto any senior team in the country. Provided they keep focused there is reason why the Mary Quinn cup won’t be resting in the Breffni County for the next 12 months.

One player with a double interest in Sundays TG4 Ladies All Ireland final day is former Monaghan player Catriona Brady. A native of Aghabog, Brady will be playing centre back on the New York team in the junior final and then taking her seat to watch her home side Monaghan in the senior final.
The versatile Brady played for Monaghan from 1995 to 2006 winning two senior All Ireland medals. She moved to New York to be with her boyfriend three years ago and immediately started playing football. While there are only five club teams in the Big Apple Brady is adamant that won’t hold her side back on Sunday. “We might not get as much club football as the teams back home but having played with Monaghan for over ten years I can assure you that our county side does the same amount of training and the girls are every bit as committed as those in Ireland”, said Catriona.

New York has surprised a few sides this year. They flew home for the quarter final were they overcame Carlow and then after a week’s stay they disposed off a red hot Wexford side in the semi final. On Sunday next they play Wicklow in the junior final. The side is a mixture of Irish and Americans and includes former county players Molly O Rourke, Michelle Brennan and Imelda Mullarkey. Catriona will not have a chance to visit Monaghan on her trip home as win lose or draw, she and her teammates will be joined by their families and friends for a banquet in Dublin on Sunday evening and then return to the States on Monday.

If New York were to win on Sunday Catriona would join a very elite group of players who have won both an All Ireland senior and junior medal however she would become the first to do so with two different counties.