Home / Schools and Industry get growing together 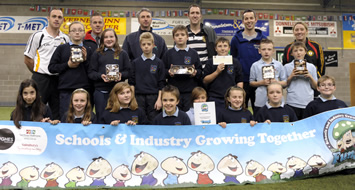 Eight Primary schools in the Dungannon area have participated in the Fungi Club initiative which is now in its second year. The programme is tailored to educate children about mushroom growing, nutrition, and experience the supply chain from growing to final customer.

Hughes mushrooms, Producer organisation Northway Mushrooms and Sainsburys have worked together to bring the initiative to the schools. During September compost was delivered to schools and Eugene Hughes helped the children to grow mushrooms in their classrooms. Children were able to see how the two different varieties chestnut and white compared during growing and taste the fruits of their crop.

The children had some impressive crops and grew huge flats, the largest being 25cm. Hughes were impressed with the interest that the children showed in mushroom growing.

The children then all visited a commercial mushroom farm, Frank Donnelly who is based at Collegelands near Moy. There they were able to see the efforts that a commercial grower takes to produce a high quality mushroom that they see in their local Sainsburys. Frank demonstrated how he had made efforts to reduce his carbon footprint by installing a biomass boiler to heat his growing tunnels.

The children were able to follow Frank’s mushrooms right to the end of the supply chain at Hughes Mushrooms factory. They seen the refrigeration, quality checks and labelling procedures required before the product can be dispatched to its final consumer.

The final phase of the programme was a Fun day at Loughview sports Centre in Dungannon. Karol McQuade organised a fun filled 2 hours of activities for the 180 children from the 8 schools. The teaching staffs were also involved in an impromptu dance off which was secretly enjoyed by all. The children competed in the 14 mini sport stations set up by Karol and his colleague Kelly. It was a fun packed energetic two hours for all involved and suited all the children involved as they had to use various skills.

The winning school overall was Bush Primary school. The eight schools involved are looking forward to the new challenges and activities that the fungi club will throw at them next year.