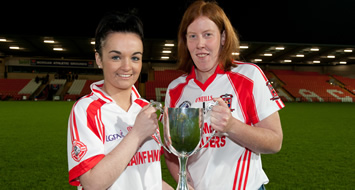 This weekend sees all three Tesco Ulster club finals being played. The action throws in on Saturday with the junior decider between Sperrin Og (Tyrone) and Inniskeen (Monaghan) in Truagh at 3pm. Both teams can count themselves fortunate to be in the finals as they had lucky escapes in their respective quarter finals. Sperrin Og needed extra time to see off Faughanvale while Inniskeen needed a last minute penalty save to advance against St. Pats. In the semi finals both were impressive as they beat Drumlane and Cloughaneely respectively. Sperrin Og will depend heavily on the experience of Eimear Teague. The county star has been pulling the strings in midfield, defending when needed and driving forward effectively. With that said they are by no means a one woman side and big games will be expected from the Mc Cullagh and Fox sisters. Inniskeen like their opponents have only one county player in their side – Isobel Kierans. She is very versatile and her battle with Teague could be key to victory. At full forward they have former All Ireland medal winner Voreen Quigley who given half a chance can conjure up scores from nothing. Truagh is likely to be very heavy come Saturday so player fitness could be vital in what should be a close encounter.

On Sunday Clones will host a double header. First up will be the Intermediate final (1-15pm) between Lisnaskea (Fermanagh) and Omagh St. Endas (Tyrone). This will be an interesting game. Lisnaskea are backboned by a number of Fermanagh County players such as Aine Martin, Sharon Little and Caroline Little. They beat a fancied Newtownbutler side to advance in Fermanagh and then overcame Monaghan Harps and Gowna scoring 8-25 along the way. St. Enda’s don’t have as many county stars but had comfortable wins in reaching the final over Ardtrea and Dromintee. Former Tyrone player and manager Michaela O Neill adds experience to a side littered with good footballers such as Nicola Mc Crossan and Christiane Hunter. The Tyrone side reached the All Ireland junior final in 2010 before losing after a replay. That adventure has ensured a balanced side and produced a wonderful team work ethic. This one should go to the wire.

In the senior final Donaghmoyne (Monaghan) go in search of their sixth Ulster title when they meet Glenfin (Donegal) at 3pm. Donaghmoyne have a host of county players in their starting fifteen including All Star nominees Amanda Casey, Cora Courtney, Cathriona Mc Connell and Sharon Courtney. They have hit over thirty points in the Ulster championship as they overcame St. Galls and Clann Eireann. Last years defeat at the hands of Termon hurt so Francie Coleman should have no trouble motivating his troops. Glenfin on the other hand have nothing to loose. No one expected them to win the Donegal championship never mind reach the ulster final. With the likes of Karen Gutherie, Grainne Houston, Dianne Toner, Mari Herron and Yvonne Mc Monagle it was no surprise that they beat Annaclone and Lurgan. Winning this year might be a step too far but them who thought Termon would win last year?