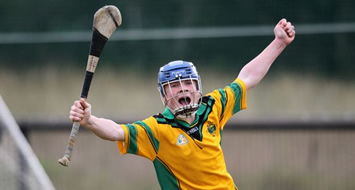 A goal 7 minutes from time looked as if it was going to change this enthralling BT MacNamee Cup in Ballymena recently.

A handling mistake in defence from a long Daniel Black delivery left an easy chance for St Killian’s corner-forward Ronan McCambridge to slot home their second goal. It put them a point up with the wind at their backs.

However St Mary’s rose to the challenge and hit an unanswered 1-2 in the last 5 minutes to snatch a victory their overall contribution to the game probably deserved.

Firstly Shea Shannon levelled the match 1-6 to 2-3 with his third point from a free, and then with 3 minutes to go, Dominic McElhill’s free was grabbed by Conor J McKenna. McKenna fired in a shot from 30 metres that sub Oisin McVicker deflected past St Killian’s goalie Paul McMullan. McElhill popped over a late insurance point.

McMullan was brilliant in goals for the Tower, particularly during the first half, as was Shane O’Connor at midfield, while Conall McAteer, Scott Walsh and Liam Gillan, closed out many St Mary’s attacks.

However the Belfast boys carried the game to them into the wind, with the McKenna twins, Nathan Gibson, Barry O’Neill and Colm McLarnon particularly effective, while Tiernan Murphy and Shea Shannon were very quick on to ball in space.

Murphy took advantage after 13 minutes to open the scoring by stroking home after Devine’s centre was not properly dealt with by the Garron Tower defence.

However after 20 minutes St Mary’s were only 1-2 up with the strong breeze on their backs and St Killian’s were growing in confidence.

Magee pointed a free and then, in the 24th minute, O’Connor and Black were involved before Leo Morgan picked up the centre and slotted home a goal.

David Kilgore added a point but Tiernan Murphy responded with a similar score – the difference between the teams at the break.

St Mary’s continued to dominate general play, but could only add points from a Shannon free and an excellent solo effort from Colm McKenna.

However the goal from St Killian’s proved to be the spur St Mary’s needed and they finished strongest to win back the Cup.