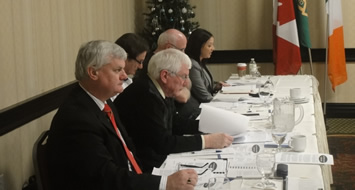 The Toronto Minor Board was present with attendance from the Toronto Chieftains, Durham Shamrocks, Brampton Rebels and the Ottawa Gaels.

Special guest was Uachtarán Chomhairle Uladh C.L.G. Aogán Ó Fearghail who gave encouraging and informative addresses to the attendees. He was pleased to see the Covention’s acceptance of the Canadian County Board’s Strategic Review and Action Plan for January 2012 – December 2015 which was developed under the leadership of High Performance Director Dr. Eugene Young, Secretary Danny Murphy and Overseas Chairman Tom Daly from Ulster Council.

Discussions are taking place regarding the possibility of Toronto hosting the 2012 Ladies All Star Tour, a Canadian Championship to celebrate the 25th Anniversary of the County Board and the Continental Youth Championships being held in Canada for 2015.

From clubs submitting motions to the County Convention, for the third year in a row, the debate about sanctioned players drew attention. A motion by Brampton Roger Casements to change Bye Law #17 that states a maximum number of seven sanctioned players and that a club fielding a second team or junior team would be allowed to register 3 additional sanctioned players be amended to 7 sanctions. It did not gather the required two/thirds majority and was defeated. St. Mike’s motion to extend the end date for sanctions for Canada to July 20 from July 1 was defeated also.

Four other motions concerning affiliation with Ladies Football and the Camogie Association, Divisional regulations and governance that were submitted by the County Board to the Convention were approved by delegates.