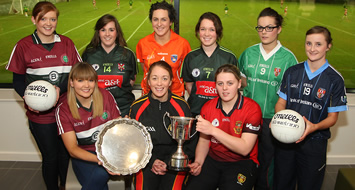 The 2012 Dowd Cup supported by O’Neills and the Queens GAA Academy was launched recently at the new facilities at Queens Playing Fields at Upper Malone. The annual competition which is the only one in Ireland to bring together colleges and counties begins with the qualifying rounds on 8th Jan, and with five counties and three colleges competing for semi-final places it’s sure to throw up some great football.

Speaking at the launch Gregory McGonigle who is involved with both UUJ and Monaghan spoke of the great benefit of the competition to both colleges and counties. “The introduction of counties into the Dowd Cup competition last year has brought the competition to a whole new level. It now provides an excellent opportunity for counties to try out players ahead of the National League at the start of February, and the higher standard of competition that the counties brings helps the colleges in their preparations for the O’Connor Cup.”

This year’s competition sees two groups for the qualifying rounds with the top two teams from each group progressing to the finals weekend on 28th & 29th January. On that weekend the McNally Plate competition will also take place with seconds teams from UUJ and Queens competing along with St Mary’s, Magee and Coleraine. Sheena Kelly, Ulster GAA Ladies Football Development Officer and organiser of the competitions said “The Dowd Cup weekend has always been a great weekend for university football in Ulster since it’s inception in 1994 and I’m sure 2012 will be no different. The introduction of the counties into the competition last year proved to be such a success that we are delighted that they are part of it again this year. I’m looking forward to a full programme of games in January, fingers crossed the weather will be kind to us!”

The draw for the competition also took place at the launch with the following fixtures planned for the New Year:

Pictured at the launch are representatives from some of the counties and colleges participating in the Dowd Cup & McNally Plate along with Ulster GAA Ladies Football Development Officer Sheena Kelly.