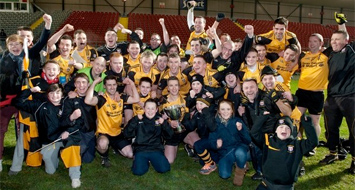 An Port Mor have made history by becoming the first Armagh club to win the Ulster Club Junior Football Championship, following victory over Tyrone champions Brackaville at Pairc Esler Newry on Saturday evening.

An Port Mor started the game brightly and went in at half time with a 2-3 to 0-6 lead, with the goals coming courtesy of Shane Nugent and Christopher Lennon.

Within ten minutes of the second half, Brackaville were reduced to 14 men when inspirational captain Cahir McGuinness picked up a second yellow card.

An Port Mor made the most of their extra man and were able to close out a historic victory for the club.