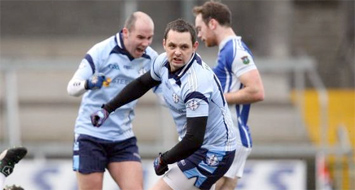 Cookstown Fr Rock’s are the Ulster Intermediate champions after they overcame a strong challenge from Warrenpoint in a cracking encounter at the Athletic Grounds in Armagh.

The Tyrone men required a last minute equaliser courtesy of substitute Jason Quinn to force the game into extra time. During that period they took complete control limiting their opponents to just a point as the Warrenpoint challenge faded, the Down champions finishing the game with thirteen men.

Ross McGarry landed four first half points for Warrenpoint with Owen Mulligan and James McGahan responding for a Cookstown side who led 1-5 to 0-5 at the break, John Gilmore with their goal.

McGahan finished to the net early in the second half as Cookstown looked to be in control but three points from McGarry coupled with a Gabriel Smith goal turned the game on its head. Trailing by a point Cookstown had Barry Hughes sent off three minutes from time before Jason Quinn popped up with that late equaliser.

It took eight minutes for the opening score of extra time to arrive when Gilmore got his second goal and moments later Warrenpoint had Ruairi Cowan sent off. Paddy Kelly then pointed before substitute Shea Curran received his marching orders.

McGarry took his personal haul to nine but on the day it wasn’t enough as Cookstown closed the game out with points from Conor Mullan, Owen Mulligan and Shea McGarrity.