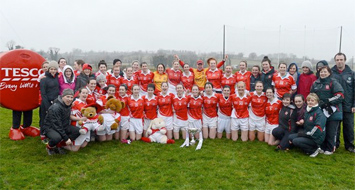 An early goal from Fiona Lafferty set Donaghmoyne on their way to their third Tesco Homegrown All-Ireland Senior Club Championship title success as they beat holders Carnacon 1-10 to 1-05 in Leitrim.

The Monaghan champions produced an impressive performance to dethrone Carnacon, and the outcome was beyond doubt long before the final hooter sounded.

Donaghmoyne set the agenda from the start, and driven on by the outstanding Courtney sisters, they attacked Carnacon from all angles.

The heavy conditions took their toll on both sides and spoiled the game as a spectacle, but Donaghmoyne were deserving winners of the Dolores Tyrell Memorial Cup for the first time since 2009.

The Mayo champions scored just twice in the second half and, were it not a fortuitous goal from Natasha Beegan on 26 minutes, would have been in dire straits at the change of ends.

Around the middle, the Monaghan ladies ruled the roost as Amanda Casey and the outstanding Cora Courtney eclipsed Claire Egan and Martha Carter, while Fiona Lafferty and Majella Woods were a constant threat up front.

Meanwhile, Sharon Courtney, with a little help from sister Fiona, restricted Carnacon’s eight-time All Star Cora Staunton to just one point from play.

They went 17 minutes without a score during the first half and failed to raise a flag for 22 minutes during the second period.

Carnacon defenders Caroline McGing and Noelle Tierney could have done very little more for the cause. McGing in particular produced an inspirational performance and kept Donaghmoyne captain Catriona McConnell scoreless from play.

At the end of an eventful and hard-fought first half, Donaghmoyne led by 1-5 to 1-3.

They hit the ground running with a pointed free from Catriona McConnell inside the opening minute and, moments later, were awarded a penalty after Carnacon goalkeeper, Michelle Higgins took down Niamh Callan.
McConnell’s well-struck kick hit the post, but Fiona Lafferty followed up to drill the ball in to an empty net.

Cora Staunton did stop the rot with a well-taken score on seven minutes, but Donaghmoyne had already settled into their stride by that stage.

Three frees from Catriona McConnell and a point from Hazel Kingham eased them ahead by 1-5 to 0-1 by the 22nd minute.

Carnacon were chasing shadows, but a freakish goal soon after threw them a lifeline when Cora Staunton’s mis-hit free was spilled by Donaghmoyne goalkeeper Linda Martin and Natasha Beegan toe-poked the ball over the line.

Fiona McHale also hit the target before the interval as the tide started to turn.
However, any lingering hopes that the Connacht champions may have had of overtaking their old rivals were extinguished during the third quarter as Majelle Woods (2), Catriona McConnell (2 frees) and Cora Courtney all posted points to put the issue beyond doubt.

The last quarter saw Carnacon throw everything into attack but all they could muster was a free from Cora Staunton, as Donaghmoyne defended superbly.