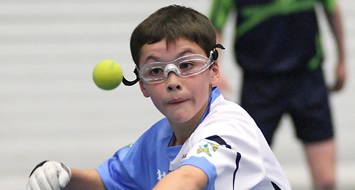 The sport of GAA Handball is on an upward curve at present, with playing figures rising year on year. The sport is in better shape than ever, whilst the recent record breaking World Championships held in the Citywest Arena Dublin has seen a significant increase in media coverage and hype across the country. Ulster Handball is also is in a very healthy state with no less than 20 gold medals being won by Ulster players across both the 40×20 and One-Wall codes of the game at the World Championships.

As part of the GAA Handball Schools Initiative, an ever increasing number of schools are erecting both indoor and outdoor One-Wall facilities which has seen a surge in interest in the game at Primary and Secondary level across the province. Ulster GAA have played a key role in this surge in growth and are currently building for the future by undertaking an ambitious schools project in conjunction with GAA Handball Ireland. Ulster GAA’s Regional Development Officers have teamed up with National Handball Development Officer Darragh Daly to run a Provincial ‘One-Wall’ schools event for 1st & 2nd Year Boys. A series of qualifier tournaments will result in the top school teams from each county blitz qualify to the provincial finals where they will compete against some of the top handballer’s from each county and claim the provincial title.

A significant number of schools have competed in the county tournaments and all finalists have now been determined for the provincial finals that will be held at St Ciarans Ballygawley on Wednesday the 12th of December.

This is the first type of schools ‘One-Wall’ event that has been organised on a provincial basis and it is something that Ulster’s Regional Development officers are keen to build on. Plans are already in place for a similar style event for older pupils early in the new year. If anyone would like further information on these events, or Handball development in their schools, please feel free to contact the Ulster GAA RDO’s.

Exciting times lie ahead for Handball with the recent formation of a unified world Handball organisation titled the World Wall Ball Association (WWBA), which has brought together the various Handball Federations worldwide to achieve the primary goal of helping Handball achieve Olympic status. With a version of Olympic Handball already in the Olympics, the renaming of One-Wall Handball to Wall Ball was undertaken to provide the game with a strengthened claim for Olympic status. Progressive steps have already been taken and it is now a very realistic possibility that Wall Ball will soon be an Olympic sport in the near future.