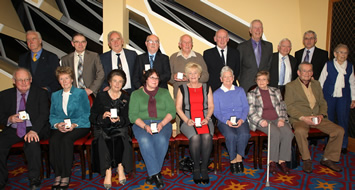 In a special commemorative event at the Titanic Building, Belfast, last Thursday, 29 November, the Ulster Council, GAA, celebrated the centenary of the extraordinary achievements of the Antrim football teams of 1912.

A crowd of some 200 people, consisting of descendants of the former players and supporters, gathered to relive the exploits of Antrim footballers of a century ago. The event culminated in the presentation of medals, by the Ulster GAA president, Aogan Ó Fearghail, to descendants of the 1908-13 Antrim players.

In those years, Antrim became the first team to win five consecutive Ulster championships, despite playing nearly every game away from home, as the Ulster Council, being impoverished at that time, favoured playing all matches at south Ulster venues where more lucrative gate-receipts were to be had. Yet Antrim did not receive any medals for their Ulster titles until 1927, when the surviving players received one medal each, inscribed for the years 1908-13. On the other hand, when Monaghan won the 1914 Ulster title, medals were forthcoming within months – a decision which caused considerable annoyance in Antrim.

In 1911, Antrim also became the first county from Ulster to reach an All-Ireland final. This first final took place in January 1912, and ended in defeat to Cork. Antrim returned in August to hammer Kerry by an incredible twelve-point margin, 3-5 to 0-2, but lost this final also to Louth in the month of November. By playing in two separate All-Ireland finals in one year, Antrim set another novel record.

The Antrim team was drawn entirely from Belfast clubs, of which only John Mitchel’s and Patrick Sarsfield’s still exist. These two aside, the Seaghan an Díomais and Ollamh Fodhla clubs formed the backbone of the county team. Five of the players including the 1912 captain, Seán Coburn, were natives or previous players of Louth. Another player, James Murphy, later played for Cork. Most remarkably, John Mitchel Darby was a native of Liverpool who came to Belfast in 1907, he worked as a teacher of navigation on Dock Street, served as secretary of the South Antrim Board and as a prominent referee, and died suddenly in October 1912, a month before the second All-Ireland final. Defender Patrick Barnes was a native of Aghagallon, but the other Antrim natives were city men.

At least half of the players had previously featured for soccer clubs, and the fact that one of them (‘W. Williams’) played under a pseudonym in the 1912 final suggests he was a soccer player. It was no coincidence that the team was noted for ‘fast and clever ground play’.

The most startling revelation of the night was that one Antrim player from the 1912 final, William Manning Jr, was killed by a bullet while serving in the Royal Dublin Fusiliers in 1918. A native of Ardglass, Co. Down, Manning’s story was lost amidst the tumult of that revolutionary period and had been forgotten until lately.

The presentation on the night of the new set of medals from the Ulster Council, both helped to redress a longstanding anomaly and to serve as a token recognition of these teams and their ‘titanic’ legacy in Ulster GAA history. Many years were shed by the relatives who received these medals, as they recalled the stories of their fathers’ and grandfathers’ former fears. And a common thread running the event was a renewed sense of pride in the achievements of yore, of which many present had not been fully aware.

Photo Caption: Descendants of the 1908-13 Antrim players who received medals from the Ulster Council at the Titanic Building last Thursday night.