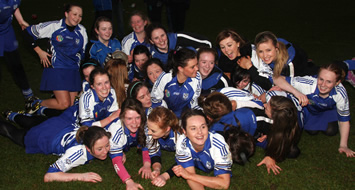 St Patrick’s Maghera collected their fourth successive Colleges’ Senior title in emphatic style in Ballymena, extending their record title count to 15 in 26 seasons at the top table. St Pats were led by Derry Senior players Aoife Ní Chasaide at centre back and the excellent Shauna Quinn at midfield. Despite battling performances from CPC’s Maria Donnelly and Niamh O’Neill, the Maghera school ran out comfortable winners

Loreto Coleraine bridged a 10 year gap to collect their second Fr Davies’ Cup in Ballymena before the Corn Uan Uladh Final. Eilís McNamee, Megan Kerr and Claire Tracey were superb at the back for Loreto while midfielders Roseanna McAleese and Cristin O’Kane worked hard while there was danger up front from Clodagh Connolly, with Nicole O’Neill accurate from frees. St Pius X didn’t have the same number of players who constantly lifted their game.  Many were there for short bursts with Sarah Cassidy and Caoimhe Glass the two that played consistently well.

St Catherine’s Armagh have won their first ever Ulster Colleges’ title by collecting the Medallion Shield title by defeating Assumption Ballynahinch. St Catherine’s had a number of excellent performances – the likes of goalie Aoife McGaffin and captain Eimear Hayes, but Joanne Mullan really stood out over the hour. Assumption mad a good game of it in the second half and tagged on goals from Megan Doherty, Aimee McAleenan and Colleen Clarke to close the gap significantly. However Joanne Mullan steadied the ship for St Catherine’s as they ran out 10 point winners

Holders St Mary’s Magherafelt, with 10 players from last season’s winning side, proved much too strong for first time finalists St Killian’s Garron Tower in the Corn Eimhear final in Ballymena. The twin threat of Ballinascreen pair Eimear McGuigan and Jackie Donnelly caused St Killian’s battling troop’s endless problems. By the end of the first quarter their more clinical forwards had accumulated 1-3, and this was stretched to 1-9 by half-time. St Mary’s ran out comfortable winners despite best efforts from Annie Leech and Dervla Cosgrove.

After finishing 1-3 each last Sunday in this all-Cavan Senior Shield final, a low-scoring replay was anticipated with both defences in the ascendancy. That was how this game panned out the first half with St Claire’s 0-2 to 0-1 ahead at the break. Loreto then put the foot down in the second half with Katie and then Laura McKiernan (2) finished the scoring for Loreto, who now go through to the All-Ireland series in February.