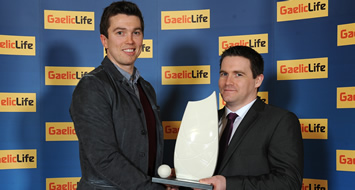 The fantastic achievements of Ulster clubs and their individuals were honoured in style last night at the Gaelic Life Ulster Club All Stars.

It is testament to the high esteem in which the awards, now in their second year, are held by the GAA community in the province that so many chose to brave the elements to make it to Cookstown’s Glenavon Hotel for Monday night’s event.

The big winners on the night were, unsurprisingly, Crossmaglen. Not only did they have six players on the All Star Football selection, but they also saw Stephen Kernan crowned as Footballer of the Year, with Paul Hearty and Oisin McConville the joint recipients of the inaugural Hall of Fame award.

For his exploits in last year’s All-Ireland hurling final which saw him finish with a personal tally of 3-7 against Offaly’s Coolderry at Croke Park, and for what he has done since then in helping Loughgiel retain their Antrim and Ulster crowns for a third consecutive year, Liam Watson was a very worthy recipient of the Hurler of the Year title.

Kernan claimed the top prize thanks to a series of sparkling displays as Crossmaglen’s playmaker, and the architect of many of his side’s best work. Having captained the team to All-Ireland glory last March, he has continued his rich vein of form to help the Rangers to within touching distance of a third consecutive All-Ireland title, with Armagh and Ulster crowns already secured.

This was the first time that the category of Dual Player of the Year was handed out, and the prize went to Swatragh’s Ruairi Convery, who excelled in both the small and big ball codes, helping the hurlers to a first Derry senior final and leading the footballers to an intermediate league and championship double in the county.

Slaughtneil’s rising star Gerald Bradley was presented with the Young Hurler of the Year award, making it an Oak Leaf double. Always knowing where the posts are, Bradley was a key member of both the minor and u-21 championship-winning teams this year.

The winner of the Young Footballer of the Year was Warrenpoint’s Ross McGarry, whose quality scoring performances in their attack was a key factor in his side reaching the Ulster Intermediate club final where he was unable to prevent a loss at the hands of Cookstown despite him hitting nine pointed frees.

It was a fairytale season for An Port Mor as they tasted provincial glory for the first time with the capture of the Ulster Junior Championship title, and their achievement was duly recognised with the selection of Niall Gorman as the Football Club Manager of the Year. In hurling, that honour went once again to Loughgiel’s PJ O’Mullan, the only person to have picked up awards in consecutive years.

The females were also honoured on the night, with Donaghmoyne’s Cathriona McConnell getting the nod as the Ladies Club Player of the Year for her exploits in captaining the Monaghan side to another All-Ireland Senior Championship crown, while Rossa’s Natalie McGuinness was selected as the Club Camogie Player of the Year, a welcome boost as she prepares for her side’s upcoming All-Ireland title tilt.

One of the most hotly contested categories was for another new award, Club of the Year. In the end it was Killeavy who emerged victorious, their incredible success both on and off the field across all codes making 2012 a year which nobody in the club will forget.

Crossmaglen have ruled the roost on the club scene since 1996, and it was fitting that two of their most influential players over that period be the recipients of the inaugural Hall of Fame award. Between them, the two players have amassed a total of 64 senior club championship medals – and who would bet against that figure rising again in March. That’s 32 each, including six All-Ireland’s, 10 Ulsters and 16 county championships.

Gaelic Life would like to congratulate all award winners, as well as the wider GAA community in Ulster who once again gave the awards their full support with over 12,000 online votes having been registered. We would also thank our sponsors, Belleek Living, Lairdesign and Murphy’s Gaelic Gloves, as well as the Ulster GAA, Ulster Camogie and Ulster Ladies GAA for their ongoing support for this venture. We have no doubt that, just like the players present on Monday night, the most glorious days are still ahead.

Pictured is Crossmaglen’s Stephen Kernan who collected the Footballer of the Year award.