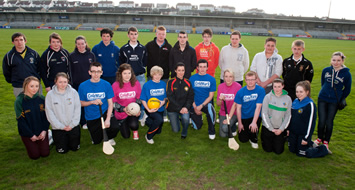 Ulster GAA, in association with IFA, will host a round of GoldMark Introductory Workshops to promote the GoldMark Programme to young people involved in sports volunteering, aged between 14 and 24 years.

The GoldMark Scheme is run by Volunteer Now and recognises three levels of volunteering 50 hours, 100 hours and 200 hours – this scheme is recognised by Department of Education and will help young volunteers on their CVs and college applications.

Hundreds of young GAA volunteers have already signed up for the GoldMark Programme, with many of them due to receive their certificates of award on Tuesday 26th February at a special awards ceremony in Wellington Park, Belfast. It is hoped these workshops will inspire many more young sports volunteers to gain official recognition for their efforts.

Clubs are encouraged to get their young volunteers from 14-24years to these workshops. Registration is essential for these workshop by emailing sharon.haughey.ulster@gaa.ie or phoning 02837517180.

GoldMark workshops are as follows: