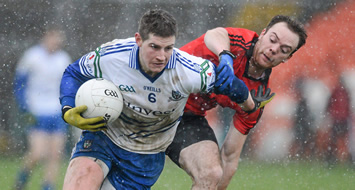 Monaghan will play Tyrone in the 2013 Power NI Dr McKenna Cup final next Saturday night at the Athletic Grounds in Armagh after two exciting semi-finals.

In the first game of an exciting double bill, Monaghan recorded a narrow 1-12 to 0-13 win over Down, with Conor McManus recording the game’s only goal in the first half.

In a brilliant conclusion to the game, Monaghan’s Darren Hughes hit two crucial points in injury time to hand his side victory after the Mourne men had led on four occasions in the second half.

Both sides were reduced to 14 men in the second half, Down’s Keith Quinn getting his marching orders on 50 minutes for a second yellow card offence, while Monaghan’s Karl O’Connell was also sent to the line five minutes from the end.

The second semi-final was a little more one-sided, as Tyrone eased to a 2-9 to 0-7 win over Fermanagh in increasingly wintry conditions at the Athletic Grounds.

A Plunkett Kane goal in first half injury time helped the Red Hands to establish control of the game by the break, and while Peter Canavan’s charges did threaten a revival in the second half with a purple patch that yielded three points without reply, a late Mark Donnelly goal sealed a deserved win for Tyrone.

The Power NI Dr McKenna Cup Final between Monaghan and Tyrone will take place on Saturday 26th January in the Athletic Grounds, Armagh at 7.30pm.