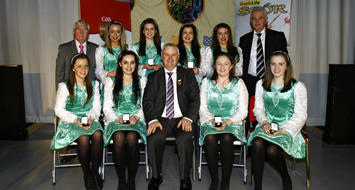 St Cecilia’s College, situated high up in the Creggan area of Derry and offering panoramic views of Derry City, was the setting on Saturday 12 January for the 2013 Ulster final of Scór na nÓg, sponsored by Gaelic Life. The venue was packed to capacity and the supporters from the various clubs from all over Ulster were not disappointed as each act that took the stage gave the very best displays of Irish music, song, dance and storytelling. It is unfortunate that more people could not be present to witness the true spirit of this important cultural competition which is an inherent part of Cumann Lúthchleas Gael.

Fear a’ Tí for the competition, Feargal Mag Uiginn from Derry, kept the show going from beginning to end with his naturally fluent style, moving easily from English to Irish while engaging the audience with the occasional quip about local county rivalries in Ulster.

Every competition from the Rince Foirne (céilí dancing) to Tráth na gCeisteanna (quiz) was hotly contested and equal in terms of quality and audience enjoyment to any professional variety concert. Great credit is due to all the competitors and their mentors who have worked tirelessly since the end of the summer in honing their talents. The winning acts will progress to the All-Ireland finals of the various competitions which will take place on 23 February in Doire Choilm Cille, but there were no losers as everyone who took part in the Ulster finals can be justifiably proud that they represented their respective clubs and counties in what was a true celebration of our unique Irish culture.

The results in all eight competitions along with the placings of the various competitors, was as follows:

The winners were An Chrois Bhán/Whitecross (Ard Mhacha). Runners-up were Naomh Éanna, An Omaigh (Tír Eoghain), and in third place were Cumann Pheadar Naofa/Warrenpoint (An Dún).

The winning group was Droim Shamhain (Muineachán). In second place was An Eochair (Tír Eoghain), and in third place was Naomh Pádraig, An Lúb (Doire).

The winner was Colm Kirke, Cluain Eois (Muineachán). The runner-up was Caitlín Ní Chathmhaoil, An Omaigh (Tír Eoghain), and in third place was Clóda Nic Cionnaith, Baile an tSuitrigh (Doire).

The winners were Coileach Eanach (Ard Mhacha). In second place were Caisleán Ruairí (An Dún) and in third place were An Omaigh (Tír Eoghain).

Victorious in this competition were Crois ar Loch (An Cabhán), who have been kingpins in set dancing at Scór na nÓg level for an incredible seven years in succession. This is a noteworthy achievement for the same group of dancers and is possibly unrivalled in Ireland. Runners-up were Cumann Pheadair Naofa (An Dún) and in third place were Naomh Éanna, An Omaigh.

We now look forward and wish our Ulster champions – three from Ard Mhacha, two from Muineachán and one each from an Cabhán, An Dún and Dún na nGall – success in the All Ireland finals in Doire Choilm Cille on 23 February. Go n-éirí go geal leo uilig.