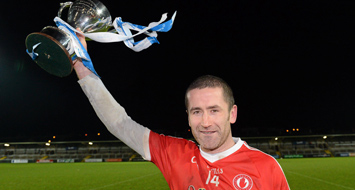 Tyrone retained the McKenna Cup on Saturday night in the Athletic Grounds with a comfortable 10-point victory over Monaghan.

Goals proved crucial for the Red Hand County, with four majors, two in either half, effectively deciding the game. The dismissal of Monaghan’s Ronan McNally just before the break also tilted the odds in Tyrone’s favour.

Mickey Harte’s side trailed for most of the first half, but went ahead when Mark Donnelly found the net on 27 minutes.

Up to that point, Monaghan had been the better side and led thanks to Kieran Hughes’ goal early on. However, once Tyrone took the lead they never looked back.

Just before the break, Tyrone went six clear following a goal from Stephen O’Neill, and then the sending off of McNally left Monaghan with it all to do in the second half.

Any prospect of a Monaghan comeback was quickly extinguished after the restart when Donnelly struck his second goal of the game, Tyrone’s third, to put them 10 points ahead.

Monaghan chipped away at the lead, but Tyrone were always able to keep a buffer of at least six points in their favour, and Peter Harte’s late penalty sealed the win for them.