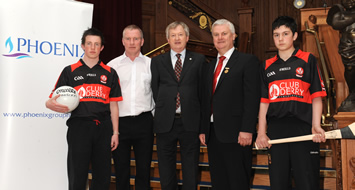 The Phoenix Ulster GAA Elite Academy will bring together Ulster’s most promising young GAA athletes for a two day residential at the University of Ulster’s Jordanstown campus on the 30th June and 2nd July. The Academy aims to recognise and develop the skills and abilities of 90 young players who have impressed playing for their club, school or county underage teams in both Gaelic Football and Hurling.

The Phoenix Elite Academy will encourage the young players to look after their health and wellbeing while developing their skills in Gaelic Games. Areas such as nutrition and hydration, fitness testing, functional movement analysis, skill development and flexibility will be some of issues tackled at the academies.

One of the key highlights of the Phoenix Academy will be the opportunity for 30 players to be selected for a Mentoring Programme by Ulster GAA.

Ulster GAA President Aogán Ó Fearghail stated, “We are delighted to announce the 2012 Phoenix Elite Academy which will put the spotlight on the stars of the future. Through the Academy these players, 45 Gaelic Footballers and 45 Hurlers, will develop their skills and abilities working with Ulster’s finest coaches and mentors. The selected players will be treated like professional players over the 2 day camp which will help them explore the important factors that impact on their playing abilities – such as skill development, nutrition and hydration and fitness testing.

“We hope through the Phoenix Elite Academy that the stars of the future, from all nine counties in Ulster, will be inspired to achieve the highest they possibly can with their club, schools, universities and county.

“The players will also have the opportunity to pull on the Ulster Jersey as they will represent their Province in an inter-Provincial game.”

Alastair Pollock, Business Development Director of Phoenix Natural Gas, said: “Phoenix takes its corporate social responsibility very seriously and we have a long history of supporting young people. We feel that our young people need all the help they can get so that they can reach their full potential, whether that be through the arts, education or on the sports field. We are delighted that our award-winning community programme now includes a partnership with the GAA”.

Past Academy participants include Michael Murphy (Donegal), Peter Harte (Tyrone), and hurler Neil McManus (Antrim), to name but a few.