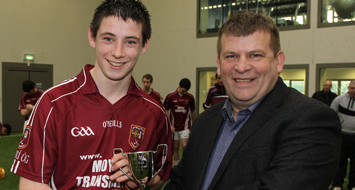 Sunday January 27th saw the culmination of the Antrim all-county minor 9-aside winter hurling tournament with the semi-finals and finals played at the Dunloy 3G facility. The ethos of this tournament from the outset was, (1) to provide winter hurling, (2) encourage team play (3), encourage forward play, forwards attacking backs, breaking the tackle, (4) improve defensive play, (5) improve stick work and good first touch, (5) composure and better decision making in a conditioned game, (6) ball in play majority of the time and (7) goals only to encourage forward play.

There were eight teams involved, 4 from North Antrim, 3 from South Antrim and 1 from Derry. In the semi-finals, of the North Antrim section A, came the powerhouse hurling clubs Ruairi Ogs and Shane O’Neill’s and in the North Antrim section B, McQuillan’s and Kevin Lynch’s (Derry). From South Antrim came the equally strong contingent of the Rossa club (the tournament favourites), who fielded two minor squads in the competition and represented South Antrim in both section A and B semi-finals, a testament to the great work being done at club level. Representing South Antrim in section A, were a very strong St Enda’s team and in section B, the Patrick Pearse’s club (the dark horse of the tournament). Games were 15 minutes in duration (7.5 minutes per half) and were of high intensity.

The Ruairi Og’s club from Cushendall became the first winners of the Minor 9-a-side winter hurling league when they beat Rossa in a tempestuous and hard fought cup final at the Dunloy Centre of Excellence on Sunday January 27th. A goal from team captain Donal O’Hara with practically the last puck of the game was the score that decided it after the teams were level on two occasions in the final minutes. It was a fiery contest which saw three players, two from Ruairi Og’s and one from Rossa, receive straight red cards as match referee Tom McGilligan did well to keep a lid on matters.

The Ruairi Og’s club made the brighter start with two quick goals from Alex Delargy and from then on Rossa were chasing the game. When Ruairi Og’s had a player sent off Rossa drew level and set up a breaktaking finish. Rossa were denied on two occasions in the dying minutes when the Ruairi Og’s keeper Colin Hayden made two unbelievable saves. The Rossa captain, Padraig McGreevy, twice brought the Belfast side back on level terms after Conrad McDonnell had edged the Ruairi Og’s club in front.

Just when extra time was looming team captain Donal O’Hara popped up to score a great winner and seal the destination of the first Premier Electrics Cup Winners. In their respective semi-finals the Ruairi Og’s club were made to work all the way by surprise packets Shane O’Neills who played some superb hurling. Rossa just got the better of a spirited St Enda’s team who clawed back a five goal deficit, to one, in the second half. The game could have gone either way and was won in the dying seconds by Rossa who ran out winners on a score of 9 goals to 7.

In the (shield) B final the McQuillan’s club proved too strong in the end for a gallant Pearse’s side for whom, Matt McKillen, Eoin O’Neill, Conor Davidson and Robbie McNulty gave star performances. However the goal scoring power of Ciaran Butler, Ronan McGary, Sean McCaughan, Paddy McHenry and Alvin Babby proved too much as the McQuillan’s club collected the B crown.

In the B semi-finals, the McQuillan’s club defeated a gallant Kevin Lynch’s club from Dungiven by 13 goals to 7. While in the other, Pearse’s played some great hurling beating Rossa B by a score of 10 goals to 7. In that game Robbie McNulty scored the goal of the day when he volleyed a pass from Conor Davidson into the roof of the Rossa net.

Congratulations go to the McQuillan’s club for winning the B final and Ruairi Og’s club the A final. This pilot tournament, to promote hurling in Antrim was a resounding success, according to the excellent feedback obtained from all the clubs and mentors involved. It achieved its main goals and Ulster Council GAA will now take the mantle and extend it province wide in future years to come.

We would like to take this opportunity to thank our sponsors, of the tournament, McKeagan Transport (Seamus McKeegan), Antrim Post, Sports NI, Premier Electrics (Tony Shivers), Pat O’Kane hurls and Caman hurls (Gavin Duffy), the referee Tom McGilligan and all the clubs and mentors, without whom this tournament would not have been possible. This tournament was extremely helpful in identifying emerging talent. We would like to point out there are open trials for the Antrim U17 hurling development squad currently being conducted at the 3G facility on the Jordanstown campus, January 28th, Feb 4th and Feb 11th and we would encourage all players to participate.

Many people assisted throughout this tournament and we would like to take this opportunity to thank them personally. A particular thanks must go to Seamus McKeegan and Tony Shivers who have been long-term stalwart supporters of promoting hurling in Antrim. Tommy McIntyre for organising the official referee’s at the various venues and finally the Antrim Post, for coverage of the tournament.