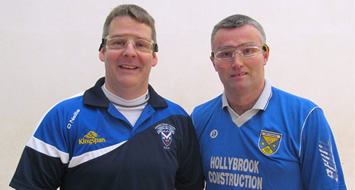 The 2013 Ulster 40×20 handball championships are all but completed, with just three outstanding doubles finals to be contested in the minor, under-21 and silver masters championships.

Whichever way the last three results turn out, Tyrone are guaranteed the under-18 doubles prize, Monaghan are assured of the under-21 doubles title, and Antrim will hold on to the silver masters A title.

Last weekend’s Ulster final programme sorted out most of the provincial doubles winners for the 2013 season and while it was Tyrone that emerged with the most singles medals from the previous week’s action, it was Monaghan who fared best in the doubles final programme.

Monaghan’s sequence began last Wednesday and Thursday when the county claimed the golden and emerald masters b doubles titles, and those two results were subsequently followed up on Sunday with success in the junior and junior b deciders.

The junior doubles championship climax saw Terry Kiernan exact some revenge on his singles final conqueror Barry Devlin as he teamed up with James Gavaghan to deny Devlin and Ryan Daly in an enjoyable match that was played at a high tempo.

The junior b doubles final was a gripping battle, which eventually swung the way of Conor O’Gorman & John Farrell, the Monaghan pair inflicting more agony on Down’s Sean Digney and Martin Turley who had both lost out the previous weekend in singles finals. Digney was particularly unlucky as he suffered a 21-18 tiebreaker defeat for the second weekend running.

The county will also produce the winners of the silver masters A decider with former senior stars Paddy Crothers and John McGarry taking on Kieran O’Hare and his partner, former Antrim footballer and hurler Donal Armstrong.

The two over-45 doubles titles will mean that Antrim are going to end the provincial adult championships with a tally of twelve titles, the same total as Tyrone whose three doubles triumphs also bring them up to a dozen.

The O’Neill county captured the over-35 B doubles prize on Sunday evening as Conal Curran and Martin Toner saw off fellow Tyrone men, Seamus McCrory and singles winner Rory Grogan, while Shane O’Neill and Gary McCrory emerged as winners of the intermediate doubles title following a close encounter with Cavan pair, Patrick Clerkin and James Brady. O’Neill was completing the double in the intermediate grade with this latest win, having beaten Brady a week earlier in the singles.

Cavan enjoyed better fortune in the masters b doubles final, which saw Jimmy McKeown and former county goalkeeper Brendan McCormack (pictured) win impressively against Tyrone’s Kenny Curran and Finbarr Fullen, and the Breffni county also shone in the Ruby masters final which was won by two of the great names of Cavan and Ulster handball, Greg Sheridan and Patsy Hand.

Cavan had of course already annexed the two main Ulster handball titles back in January with Paul Brady taking the mens open singles gong and joining forces yet again with Michael Finnegan to win the mens open doubles. Antrim’s Aisling Reilly was also crowned the Ulster womens open champion back in January.

A total of five counties feature on the list of provincial winners, and the champions in each category, with the exception of the open winners who are already involved in the Irish open competitions, will now go forward to meet the champions of Munster in the All-Ireland semi-finals.

The singles semi-finals will take place on the second weekend of March and the doubles eliminators are fixed for the fourth weekend of March. The exact fixtures will be released shortly.
Meanwhile, the 2013 Ulster juvenile championship finals, one of the biggest occasions on the provincial handball calendar, will be staged in Kingscourt on Saturday 9th March and it promises to be another wonderful advertisement for the sport in Ulster.