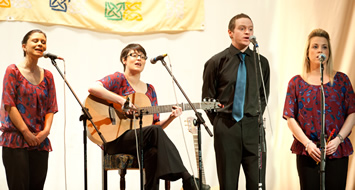 Threemilehouse in Monaghan was the venue for last weekend’s first Ulster Scór Sinsear semi-final, and although the Farney county made home advantage count as they claimed success in three of the eight disciplines on the night, it was their neighbours from Armagh who enjoyed the majority of successes.

The Orchard county’s representatives took the spoils in Ceili, instrumental music, solo singing and novelty act. Monaghan coming out on top in the ballad group, set dancing and quiz, while Cavan’s sole success of the night came in the recitation.

All eight winning acts will now turn their attentions to the Ulster Scór Sinsear final, which will take place once again in St Cecilia’s College, Derry, on April 6.

The complete results from the evening are as follows: