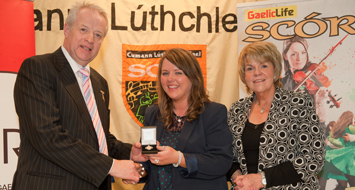 The strength of Scór throughout Ulster was demonstrated again on Saturday last, when clubs from six of the nine counties emerged as provincial champions of Scór Sinsear from the final at St Cecilia’s College, Derry.

Three of the 2012 champions held onto their titles: Omagh, winning a record eighteenth Ulster title in the Rince Céilí section; Emyvale, in the other dancing category, Rince Seit; and Aghagallon in Grúpa Bailéad.

Aontroim was one of the two most successful counties on the night. Portglenone claimed the Ceol Uirlise honours with a quintet that included four members of the Graham family, and thus took over from neighbouring parish Bellaghy (who had won the 2012 All-Ireland title).

The Amhránaíocht Aonair title stayed in Fear Manach, but this time Nicola Timoney of Béal Cú sang to victory (whereas in 2012 it was Derrygonnelly’s). In the other solo category, Aithriseoireacht/Scéalaíocht, Dan Sweeney of Killeshandra won out with his recitation based on a father-son relationship.

Kilcoo prevailed in the Nuachleas section for its maiden title in the Nuachleas category and An Dún’s only honours on the night. Scotstown, having beaten the perennial favourites Cornafean in the semi-final, came good on their promise, scoring 60 marks against 54 for Trí Leac and 50 for Mayobridge, to regain the provincial crown after a gap of several years

Despite not winning any of the categories on the night, Ard Mhacha was awarded the honours for the best overall performance in Scór, at senior and youth levels, over the course of the year.

A crowd of some 800 people was kept thoroughly entertained by the packed programme, and the interlude interjections of Fear a’ Tí Feargal Mag Uiginn of Doire.

The Ulster champions have just three weeks to practise for the All-Ireland final, which will take place at ‘The Venue’, Doire Choilm Cille, on Saturday 27th April.