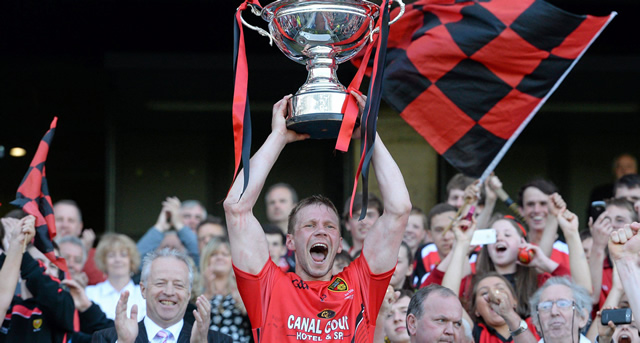 A last-gasp goal by Gareth ‘Magic’ Johnson saw Down pip Kerry at the end of an absorbing Christy Ring Cup Final at Croke Park on Saturday.

Johnson also hit the first score of the game to get Down up and running, but they found themselves behind for much of the match, until the talismanic full-forward made his late intervention.

Having lost by the exact same score to Kerry in the first round, this saw the competition come full circle for Down, who also had strong contributions from Conor Woods, Ciarán Coulter, captain Paul Braniff and super-sub Scott Nicholson. Shane Nolan and Pádraig Boyle hit 2-12 between them for Kerry, but still ended up on the losing side.

Down got off to a flyer with a goal and a point from full-forward Johnson, but Pádraig Boyle got a goal back for Kerry in a rip-roaring start. Hawkeye was called into action for the second time of the day on 13 minutes, showing that a Shane Nolan shot, which had been called wide, had actually gone over to bring Kerry within a point.

Nolan then fired home a great goal two minutes later to send Kerry in front for the first time. Paul Braniff’s third point kept Down in touch and they continued to threaten, as Johnson fired a shot just wide, while Braniff blazed a penalty over the bar.

Nolan’s accuracy helped Kerry move five clear at one stage, but points from Dónal Hughes, James Coyle and Daniel Toner left Down trailing by just a point (2-6 to 1-8) at half-time.

Former All-Ireland winner with Kilkenny, Willie O’Dwyer, was to the fore as Kerry made a strong start to the second half, but Conor Woods converted a ’65 and a long-range free for Down, who were right back in it on 48 minutes when substitute Scott Nicholson found the net.

It continued to be nip-and-tuck all the way to the finish, with both goalkeepers making fine saves; Down’s Stephen Keith from a Tom Murnane free and Kerry’s Bernard Rochford from a second Braniff penalty. Nicholson took his tally to 1-2 to help Down stay on level terms, but the ever-dangerous Pádraig Boyle edged Kerry ahead late on.

There was still time for one last swing, however, and it was fitting that two long-serving Down stars linked up for the winning score, as Johnson flicked a long puck from Braniff into the net in injury time.