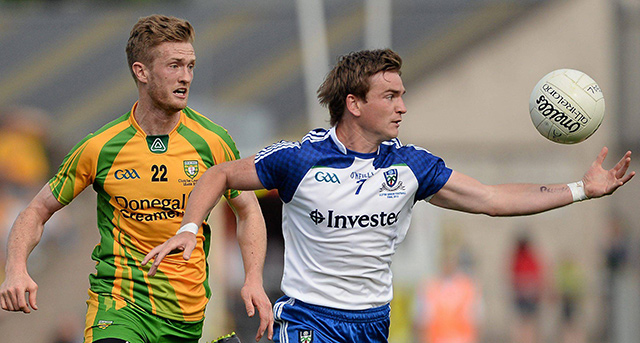 Throughout the 2013 Ulster Senior Championship, Ulster GAA will be compiling a report of the key statistics from each match. The reports will look at a range of factors contributing to game play, including possession breakdown, kick out success, possession to scores ratios and turnover stats.

Throughout the 2013 Ulster Championship we have witnessed a significant amount of inactive game time. Our Ulster final provided another such example of this problem, with the ball in play for only 44% of the total game time, equivalent to 33 minutes and 44 seconds.

In the Ulster Final Monaghan went against the trend evident through the majority of previous matches, winning the match and securing a slightly greater share of possession. Interestingly, the only other winning team to enjoy a superior share of possession was also Monaghan in their quarter final match versus Antrim.

In the first half Monaghan had 53% of possession, compared to Donegal’s 47% (Figure 2). This greater share of possession was reflected on the scoreboard with Monaghan enjoying a 3 point lead at half time, having outscored Donegal by 5 points to 2. 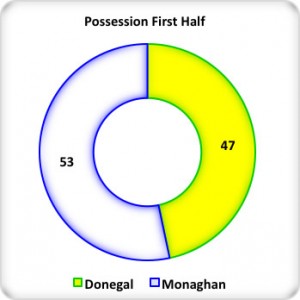 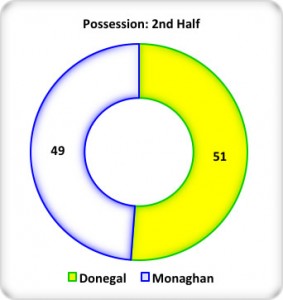 Over the course of the whole match, Monaghan emerged with a small majority in possession terms, with 51% to Donegal’s 49% (Figure 4). This match however provides an excellent comparison between possession share and scoring with regard to tactical approaches to Gaelic football. While the margins are fairly small we can speculate that in the first half Monaghan were able to build a lead through control of possession and efficient conversion to scores. In the second half Monaghan shifted their focus, yet still extended their lead, by conceding a certain amount of possession, knowing Donegal would need to commit to attack in order to narrow the deficit. They were then able to exploit the space left in the Donegal defence through turnover ball and quick movement and delivery. The second half approach was not dependent upon possession control, but largely on discipline, organisation and work rate of all players when they did not have possession. 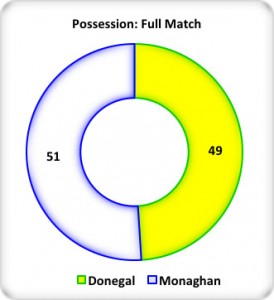 Another pattern evident throughout the championship has been the lack of correlation between possession share and kick outs won, with this game no different. Donegal, despite having slightly the lesser of possession, won 56% (22) kick outs, while Monaghan only secured primary possession from 44% (17) of the kick outs.

However, while the short kick out appears to be a useful weapon to secure primary possession, what we must take into account is the area of the pitch where the team will have the ball. They will receive the ball in a deep position where they offer no immediate threat to the opposition. This can provide the opposition with some opportunities, despite conceding possession.

Firstly, they have the opportunity to apply immediate pressure and possibly force a turnover deep in the defence. Any success could lead directly to a scoring chance. Secondly, it allows the opposition time to get organised as a defensive unit and can also allow their set up to take into account the point of attack, fairly confident in the knowledge that they will have time to shift this set up if the point of attack alters. And finally, the opposition will likely be offered more chances to turn the ball over as a team attempts to progress the ball from deep and into the scoring zone at the opposite end of the pitch.

One of the key observations throughout the championship has been the ability of teams to convert possession to attacks, attacks to shots, and ultimately shots to scores. Obviously, teams that have had the highest conversion rates have been most successful in each distinct match. However, this analysis can also allow us to identify at which stage of a possession each team was failing, and therefore identifying areas for improvement. The final analysis offered up some insight into the performances of both teams, both of whom experienced some major alterations from the previous rounds of the championship.

Donegal had won both previous matches having only created 17 shooting chances in each game, but they delivered a 71% success rate from these shots which proved enough for victory. However, in this game they created 20 scoring chances, but their success rate was halved to just 35% which as a result only resulted in 7 scores. Maybe there is an argument that Donegal have relied too heavily on their clinical finishing in previous games and their inability to create more chances has cost them in this match. The intensity brought to the game by Monaghan no doubt ensured that many of the Donegal efforts were under heavy pressure also, and therefore contributed to Donegal’s reduced conversion rate.

Unlike Donegal, Monaghan in their previous games did not experience much difficulty in creating scoring chances, having created 34 chances against Antrim and 27 versus Cavan. Where Monaghan did encountere issues was finishing the chances, with shot success rates of only 32% and 41% respectively. However, in the final Monaghan were able to rectify earlier problems. Despite being limited to only 23 shooting chances, they were able to convert 57% of these chances which equated to a match winning 13 points.

Over their 3 championship fixtures Monaghan have steadily improved their conversion of possession to scores, delivering one of the highest success rates of the entire Ulster championship (32%) on Sunday past. On the other hand, Donegal have experienced the opposite trend having fallen from 28% versus Tyrone to just 17% against Monaghan in the final. On the basis of their almost equal shares of possession it is obvious that Monaghan’s superior conversion rate was the key to victory.

While Monaghan will be delighted with their conversion rates through the various phases of possession, Donegal will need to identify where they can improve going forward. Donegal’s 2013 season so far had been based upon the clinical ability of their forwards, but they appeared to be surviving on limited chances. Throughout the USFC 2013 Donegal converted an average of 66% of possessions to attacks, while by contrast Monaghan built 82% of possessions into attacks. In its simplest terms, Donegal lose more possession before they break past their opponent’s 45m line than Monaghan.

An analysis of the turnovers will help to identify what the key issues are for Donegal with regard to possession retention. Over the course of the game Donegal only had 4 more turnovers than Monaghan, but they were clearly losing more possession through loose kick passing and getting caught in the tackle. The key difference, and maybe something which requires some further investigation is where the turnovers are occurring. It is fair to speculate that Monaghan lost the majority of ball deep in Donegal territory and therefore in a much safer position, while Donegal have clearly lost a lot of possession around the middle portion of the pitch which could offer up an immediate attacking platform for Monaghan.

Surprisingly this game witnessed the widest margin of victory throughout the 2013 USFC, equalling the margin of victory Donegal enjoyed against Tyrone. However, it is important to remember that despite beating Tyrone by 6 points, there was only a difference of 2 scores between the teams (2-10 v 0-10). In the final, Monaghan outscored Donegal by 6 scores (0-13 v 0-07), which would point towards the most impressive victory margin of the championship.

There were some obvious patterns that both teams had displayed in their previous matches that pointed towards a close match, with the outcome most likely in favour of Donegal. Despite media predictions ahead of this match, statistically this game was likely to be decided by a minimal margin.

However, one of the key things to remember about statistics is that they will only ever tell the story of what has happened in the past and will never allow anyone to reliably predict what is likely to happen in the future. As is always the danger with statistical predictions, the traits of previous matches did not replicate themselves and ultimately, in this case, it was Monaghan who benefited from the switch in fortunes.

There is little turnaround time for Donegal ahead of their final round qualifying match against Laois and therefore there will be limited opportunity to work on many issues on the training pitch. However, such is the nature of modern players; Donegal should be able to address some issues without the need for intense training drills and routines. By simply making players aware of their shortcomings and reviewing some of the Ulster final footage they will be able to highlight and address some of their key issues ahead of their match versus Laois.

The key issue for Donegal from Sunday’s game was their reduced conversion rate from their shots, which fell from a previously excellent 71% down to just 35%. A review of their shots should help to identify the reason behind this fall. Some may have been down to poor shot selection, while others may have been due to poor execution. A small percentage may be attributed to severe pressure from the opposition. Many of the reasons will be under the control of the Donegal players, and as such, can be addressed ahead of their next match.

Another key issue for Donegal that has been evident throughout the championship is their struggles to create attacks and subsequent scoring chances when in possession. It could be argued that their accurate shooting had masked this issue up to now, but now that they have had a less successful day in terms of finishing, their inability to create more scoring chances has come to the fore. They lost significant ball through loose kicking and in the tackle and a reduction in both of these areas might allow them to create a few more scoring chances which may just make the difference come the final whistle.

The Monaghan supporters and media could be tempted to get caught up in the emotion of this success, but no doubt the players and management will be quick to re-focus on their next task in the All-Ireland quarter final. Thinking about this match many Monaghan people will feel like it was a perfect performance but it is crucial for the management and players that they identify their weaknesses with the intent of improving once again come their quarter final fixture.

Monaghan have been impressive in that they have improved steadily in each match, and are now at the point, following Sunday, where their statistics are comparable with the best in each department. While this is very positive, it now makes the job of the management all the tougher in that there is no obvious weakness upon which to work, but they also must try to maintain this level of success ahead of their next match.

One area Monaghan may want to address is the kick out success rate. While they were on the wrong side of this, 10 of Donegal’s kick were taken short, and Monaghan had possibly decided not to contest these in order to get organised deeper within their own territory, and with a clear level of success. However, on their own kicks, while totally dominant on the break ball, they did lose a total of 7 from 19 kicks, 3 of which were lost clean to the opposition. While this may not appear significant, offering this sort of opportunity to gain ‘go forward’ uncontested possession to their quarter final opponent may be extremely costly.

Overall it will be crucial that Monaghan aim to maintain their impressive numbers across the board in their next game. A quick look at Donegal through the USFC will highlight just how much maintaining the positive numbers is vital to ensure continued success.