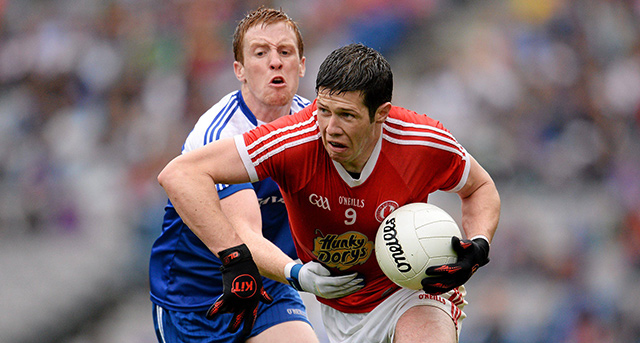 Tyrone are into the All-Ireland semi-finals after a tense and dramatic clash against Monaghan at Croke Park on Saturday evening.

Mickey Harte’s side survived the sending off of Martin Penrose at the start of the second half, and withstood a strong Monaghan performance to progress to the final four, where they will play Mayo, who defeated the reigning All Ireland champions Donegal on Sunday.

Monaghan were level at 0-9 apiece following the sending off of Penrose, but Malachy O’Rourke’s side had Kieran Hughes sent off shortly after this when he picked up a second yellow card, and Tyrone quickly slipped into a 0-11 to 0-9 lead.

Monaghan had chances to get back into the game, but Tyrone showed very cool heads to finish the game strongly and see out the victory. Tyrone lead 0-9 to 0-7 at the end of a first half which changed dramatically midway through.

Monaghan made a powerful start to the game, and lead 0-4 to 0-1 with 10 minutes played. Kieran Hughes kicked an inspirational score for them, while Paul Finlay and Conor McManus were accurate from frees as Monaghan started the game at a furious pace.

Seven of the first eight points in the game were frees, but midway through the half, Tyrone began to find the space to shoot, and they surged ahead of Monaghan thanks to some inspirational play from the remarkable Seán Cavanagh.

Cavanagh kicked three brilliant points from play, with Joe McMahon (2) and Conor Clarke also driving over huge kicks in a 10-minute spell to make it 0-9 to 0-6 five minutes shy of half-time. One of McMahon’s kicks was a monster effort from over 50 metres, while each one of Cavanagh’s points dripped with class.

Tyrone had gotten on top around the middle, and Monaghan brought Dick Clerkin into the game to mark Cavanagh and try and stem the tide somewhat. It worked a bit, and Monaghan kicked the final score of the half, a brilliant effort from the elusive McManus on the right hand side.

The second half started very dramatically, with Penrose sent off before the second half even began. The sending off resulted from an incident at the end of the first half.

Monaghan were buoyed by this, and points from Stephen Gollogly and Clerkin got them level with 42 minutes played. Clerkin was growing in influence, but Cavanagh continued to impress, even if his scoring threat was curbed somewhat in the second half.

The sending off of Hughes on 49 minutes turned the game again. Tyrone had edged two clear following excellent points from Peter Harte and Ciarán McGinley, and Monaghan never got ahead of Tyrone after this.

Although they got level at 0-12 apiece following a McManus free, Tyrone regained the lead straight away through Ronan O’Neill, and a free from Cavanagh, his fifth of the game, put Tyrone two ahead heading towards injury-time.

Monaghan needed a goal, but it was Tyrone who came closest to hitting the net in the closing stages, with Conor Clarke smashing an effort against the crossbar with a few minutes to go.

Unfortunately Cavan and Donegal were not able to join Tyrone in the semi finals, as they fell to defeat to Kerry and Mayo respectively on Sunday.