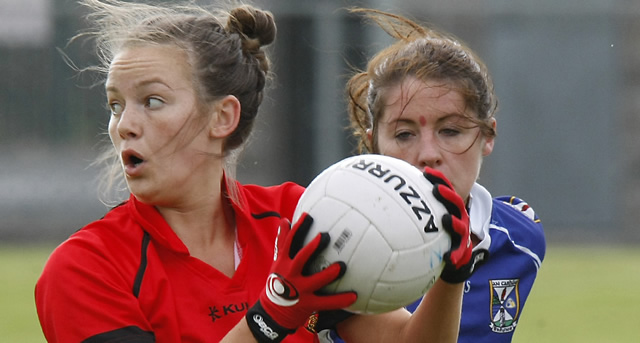 It’s down to the last four in all the TG4 Ladies Football Championships and Ulster have five out of nine counties involved at the business end of the competition; Monaghan in the senior, Cavan, Fermanagh and Down in the intermediate and Derry in the junior.

Ulster champions Monaghan will meet Galway in the senior semi-final. Monaghan cruised through Ulster with emphatic victories over Donegal and Tyrone which then set up a quarter final meeting with Laois. The midland side had always been Monaghan’s bogey team in the past but with a 4-21 to 0-4 win, it’s fair to say that monkey is well and truly off their backs. The Farney girls turned in a devastating display. They were 15 points ahead before Laois scored their first point which didn’t arrived until the 29th minute of the game. There were many stars on show including Caoimhe Mohan who hit 2-6 and Cathriona Mc Connell who contributed 9 points, including 7 from play.  They’ll hope they can continue their winning form against the women from the west to book a place in this year’s final.

Ulster will definitely have at least one representative in the TG4 intermediate final in Croke Park in September. This weekend Cavan play Down in the first of the semi- finals and the following week Fermanagh take on Tipperary.

Cavan were knocked out of the Ulster championship at the semi- final stage by Down but since then have delivered some brilliant performances to reach the last four of the intermediate competition. Against London they hit 3-22 while conceding just 4 points and then in the quarter finals they trounced a fancied Waterford side 3-18 to 1-8. The likes of Grainne Smith and Aisling Doonan have been in flying form.

Down on the other hand have had to do things the hard way. After losing the Ulster final to Fermanagh the Mourne girls have had two tough encounters with Wicklow and Sligo. In the most recent outing against Sligo they played out a nine goal thriller which they eventually won 5-10 to 4-8. This Down side don’t know when they are beaten and going into the semi- final against the Breffni girls they will be seeking to overturn the Ulster championship defeat.

Fermanagh have a tough assignment when they take on Tipperary. The Tipp girls seen off a fancied Longford to make the last eight while Fermanagh, although pretty rusty beat Roscommon 1-12 to 1-7. The rustiness was no surprise as they haven’t had a competitive game for six weeks. That win will have helped build momentum and they will savour their tie with Tipperary and a chance to make the Croker final.

In the TG4 Junior All Ireland Championship Derry have one more bite at the cherry as they play Offaly in the Junior semi-final this weekend in Carrickmacross.  The Oakleaf girls’ form hasn’t been great so far, but they’ll be hoping that they will be able to overturn the earlier result against Offaly to see them through to All Ireland Finals day on 29th Sept in Croke Park.