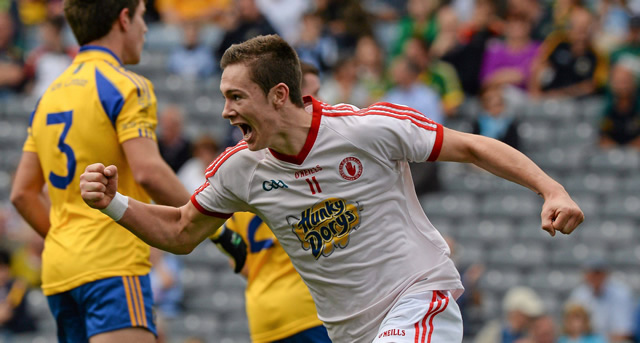 Tyrone will play Mayo in the GAA Football All-Ireland Minor Football Championship final on September 22 after they battled to victory over Roscommon at Croke Park on Sunday.

Despite trailing for long periods against the Rossies, and being second best by a considerable margin in the first-half, Tyrone dug deep to eke out the victory, with a tour de force performance from centre-half-forward Conor McKenna central to their victory.

McKenna hit 1-4 in the win, 1-3 of which came from play, and his brilliant goal early in the second half was a really crucial score, as it brought the two sides level at a stage in the game when Roscommon were threatening to pull clear.

The Connacht side were left to rue a lot of missed chances in the game, especially in the first half, when Diarmuid McGann’s weak penalty was saved by Seán Fox in the early stages.

Roscommon recovered from the miss, and lead 0-6 to 0-3 at the break with McGann on song from placed balls, but McKenna’s goal tightened the game up. Roscommon regained the lead after the goal, and were three clear again at the start of the final quarter following points from impressive wing-back Ronan Daly and Ultan Harney.

However, Tyrone were full of heart and they gave by far the stronger performance in the final quarter to take the victory. Lee Brennan kicked a couple of crucial scores in that period, while two points from McKenna had Tyrone 1-11 to 0-13 ahead with time almost up.

Then, centre-half-back Christopher Morris stormed up the field and kicked the final score of the game to confirm Tyrone’s path to a third All-Ireland minor final in six years.