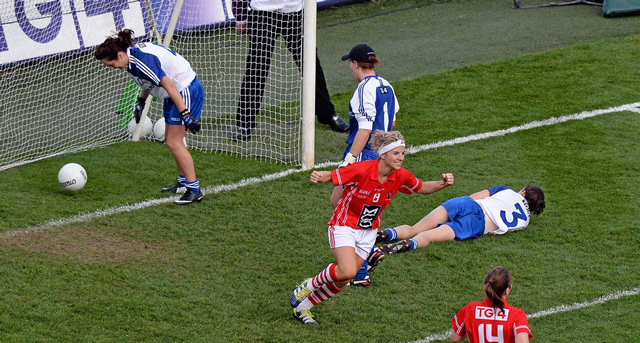 The Rebelettes completed the three-in-a-row with a gripping one-point victory over Monaghan in Sunday afternoon’s decider at Croke Park.

In front of 25,103 spectators, Cork ensured that it was final heartbreak for Monaghan for the third time in six seasons.

And like it was in 2008 and 2011, it was Cork once again who ensured that Monaghan’s long wait for their first senior title since 1997 continues.

Monaghan had a chance to salvage a draw but her Catriona McConnell’s free, which was the last kick of the game, sailed wide into the teeth of a strong breeze from some 40 metres out.

In truth, Cork could have made life easier for themselves but the winners registered eight second half wides.

Monaghan also suffered a blow with 12 minutes remaining when Eileen McKenna was sinbinned.

The Ulster champions were left a player light as a result and Cork were coming on strong.

And yet the Farney county edged ahead with eight minutes remaining when McConnell landed a free, before inspirational midfielder Juliet Murphy, who performed a retirement U-turn earlier in the season, banged over an inspirational equaliser from long range.

The scene was set for a grandstand finish and Mulcahy held her nerve to convert what turned out to be the winner, as McConnell and her teammates were left heartbroken at the death.

And so Cork were left to celebrate yet another All-Ireland title, to cement a remarkable period of dominance.

The second half was an edgy, scrappy affair at times as both sides struggled for scores.

That completed a spirited Monaghan revival, as they had trailed by five points – 0-3 to 1-5 – in the first half.

But Monaghan had a chance themselves eight minutes before half-time, with McConnell denied by recalled Cork goalkeeper Elaine Harte’s fine stop.

In the second half, Cork had the ball in the net but Orlagh Farmer’s handpassed goal was disallowed as it sailed straight into the net, seconds after Doireann O’Sullivan had sent a shot against the crossbar.